Ace here again. I thought to touch base on DNS zones, and more so, focus on what AD integrated zones are and how they work. This blog almost mimics my class lecture on this topic. Check back for updates periodically, which I will notate with a timestamp above with whatever I’ve added or modified.

First up is a background on the various parts of the Active Directory database and what gets stored in them. This will help understand where DNS data is stored as I discuss it later in this blog. 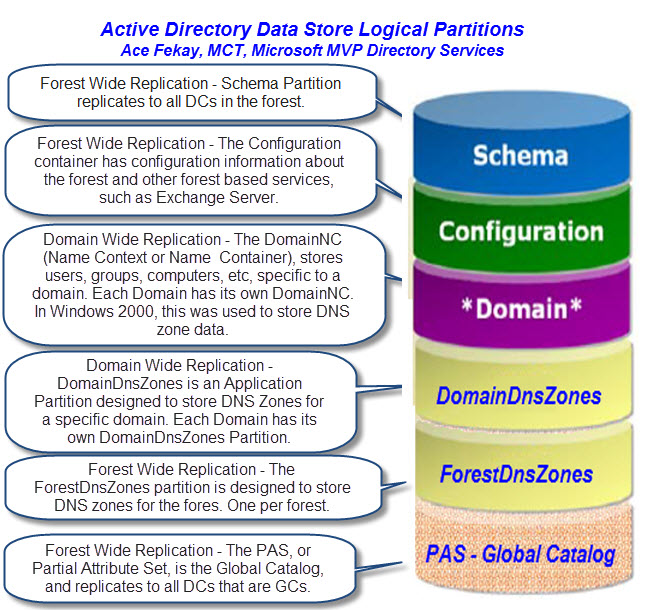 There are three possible storage locations for DNS zone storage in the Active Directory database:

You can see how not all partitions are replicated forest wide. It depends on the partition: 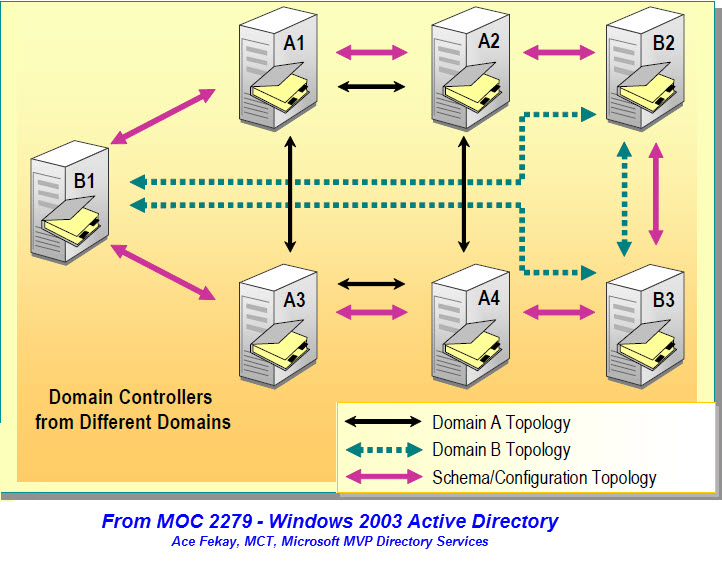 AD Integrated zones are similar to Primary zones, however their data is stored as binary data in the actual AD database and not as a text file. The specific place in the AD database depends on the DC’s operating system version and replication scope, which means what “logical” part of the physical AD database it’s stored in, which will affect which DCs in the forest it will replicate to.

And if you install DNS on another DC, the zone data will *automatically* appear because DNS will recognize the data in the AD database. AD integrated zones can also act as a Primary zone for secondary zones, whether they are on Windows machines, BIND (on Unix) or any other name brand.

Since I touched based on duplicate and conflicting zones, you may want to check if they exist in your AD database. You have to check each partition, and if you have more than one domain, you have to check the DomainDnsZones and DomainNC of each domain. You may even have to check it on multiple DCs in various AD Sites to see if they all “see” the same copy or different copies. You would be surprised what I’ve seen with AD replication problems and seeing different DCs “seeing” something different in its own database. This issue also manifests as a symptom in more than just a DNS problem, where you create a user on one DC and it never replicates to another DC.

Zone transfers allow you to create a read only copy (a Secondary zone) on another DNS server, that will pull a copy (transfers) from the read/writable zone (the Primary zone).

Primary and Secondary zones store their data as text files.

On a Windows machine, the zone files can be found in the \system32\dns folder with a file name such as “domain.com.dns”. You can have numerous read only copies, but there can only be one read/write of that zone.

Please keep in mind, the authoritative DNS server listed in the registrar for a public domain name (zone) does not have to be a Primary, it’s just the host nameserver listed as authoritative. It can get it’s data from a Primary that is not listed, hence the writable copy is actually hidden and protected from public access.

Do I need Zone transfers Allowed for AD Integrated Zones if I do not have Secondaries Zones?

The reason is that the term “AD Integrated” means the zone is stored in the AD database, and the zone will replicate to other domain controllers within the same replication scope (domain-wide or forest-wide) automatically as part of the AD replication process.

By default, AD integrated zones are configured to not allow zone transfers.

Additional security options of AD integrated zones, is one of the feature of AD integrated zones, as well as the fact that there can be more than one Primary zone copy of it. This is because all DNS servers that host the zone in a domain or forest has the ability to be a writable copies and becomes the actual “start of authority” (SOA) of that zone when a specific DC/DNS accepts a write operation, such as a client machine registering, or the DC itself updating its SRV records.

For example, if a DC updates it’s SRV and other records at the default 60 minute interval (all other machines register every 24 hours), it will update its data into the DNS server listed as the first DNS address in the network card. This server now writes it into DNS and NOW becomes the SOA of the zone. That data is replicated to other DC/DNS servers with default AD replication. Now all other DC/DNS servers will see the change.

To further explain, since the zone is AD integrated, each and every DC in the replication scope of the zone, can accept changes, due to an AD integrated zone’s Multi-Master Primary Zone features. Based on the definition of what an SOA is, that is being the DNS server that’s authoritative to accept writes, therefore, whichever DC/DNS accepted a change to the zone, that specific DC/DNS will become the SOA for that moment in time. Then when the next DC/DNS that accepts a change, it will now become the new SOA. The SOA constantly changing in an AD environment is accepted, and default behavior.

That is why you can watch the SOA name on AD integrated zones change. The data is replicated automatically as part of the AD replication process because it is stored in the AD database.

Configure AD Integrated Zones
(When converting to AD integrated zones)
Quoted: “Only primary zones can be stored in the directory. If a zone is configured on other domain controllers as a secondary zone, these zones will be converted to primary zones when you convert the zone to AD integrated. This is because the multimaster replication model of Active Directory removes the need for secondary zones when a zone is stored in Active Directory. Conversion of the zone from secondary to primary will occur when AD DS is restarted.”
http://technet.microsoft.com/en-us/library/ee649181(v=ws.10)

Understanding stub zones: Domain Name System(DNS)
Jan 21, 2005 – The master servers for a stub zone are one or more DNS servers authoritative for the child zone, usually the DNS server hosting the primary …
http://technet.microsoft.com/en-us/library/cc779197(v=ws.10).aspx

Keep in mind, for the most part it automatically works “out of the box” without much administrative overhead.

What I’ve tried to do is accumulate all pertinent information about configuring dynamic DNS registration in an AD environment. I hope I haven’t missed anything, and that I’ve explained each numbered bullet point well enough and removed all ambiguity, to fully understand each point.

And yes, this blog is regarding an AD environment. If you have a non-AD environment with a Windows DNS server that you want your computers to register, please read the following blog:

What will stop AD SRV registration: