Virtualization is a valuable asset for many organizations, including cloud computing. However, there were some drawbacks that many administrators weren’t aware of when implementing a Hyper-V infrastructure.

For example, there are ramifications of cloning servers without Sysprepping the base image first. Sysprep generate a new SID (the unique Security Identifier each machine has) upon first-time boot up. There are also ramifications with the Virtual host time service, which provides time to the virtual guests, but if the guests are part of an AD infrastructure, or if the guests are DCs, then the host time synchronization service will cause problems with the default AD forest time hierarchy, due to Kerberos’ five minute skew tolerance. Easy enough, it’s recommended to disable time synchronization on the host to prevent this from occurring.

One of the more important ramifications, which we will discuss in the section, involves virtualized snapshots and domain controllers and using the Revert feature to roll back a virtual machine to a previous point in time using a previously saved snapshot. The ramifications can effectively make a DC useless.

In this blog, we’ll talk about:

What is a Snapshot?

Snapshots are a convenient means to return a virtual machine to a previous state, such as to return to a state prior to installing an application that is no longer behaving properly.

What is the USN?

The USN, or Update Sequence Number, is the basis of how Active Directory Replication works.

When an inbound replication partner domain controller sees its partner has a higher USN value for any attribute, a replication pull request is made to replicate the changes to the partner.

Active Directory Replication does not depend on or use time displacement or a time stamp to determine what changes need to be propagated. Time based propagation as some directory services use, are based on a time stamp with the “last writer wins” rule, however this can pose a problem if the clock were to be rolled back.

A time stamp is used in Active Directory, but it’s only used to determine and resolve a conflict when an attribute has been modified at two different DCs simultaneously. In this case, the DC receiving the update will use one of three values to resolve a conflict:

And because these USN counters are local to each DC, it ensures and is determined that the USN to be reliable by replication partner DCs, because the local DC keeps track of all its own changes.

The USN can never “run backward” (decrease in value). If it does, replication partner DCs will recognize the decreased value, and determine it as an inconsistency, and will remove the DC from its own replica set. This is called a USN Rollback. Although they can be repaired, in many cases, it’s easier and more time efficient to simply force remove the DC with the USN Rollback, and re-promote it back into the domain.

You can use Ldp.exe or ADSI Edit to read the current USN, which is the highestCommittedUsn attribute that can be found on the RootDSE object properties for the domain controller.

Replication takes into account specific values and follows a pre-defined algorithm to insure replication consistency among domain controllers to reduce or eliminate divergence, such as the following:

Fault tolerance is helpful by installing multiple DCs, and provides multiple replication paths between them to reduce latency; however, you might expect the same replication change to be replicated in an endless loop. The Up-to-dateness vector eliminates this possibility along with the InvocationID. The InvocationID of a domain controller and its USN combined provides a unique identifier in the forest associated with every write-transaction performed on each domain controller.

To understand the consequences of snapshots prior to Windows Server 2012 requires a brief explanation and basic understanding of how Active Directory replication works.

Scenario: Single Domain, single AD Site, three DCs. DC-A, DC-B, and DC-C, all are replication partners between each other. 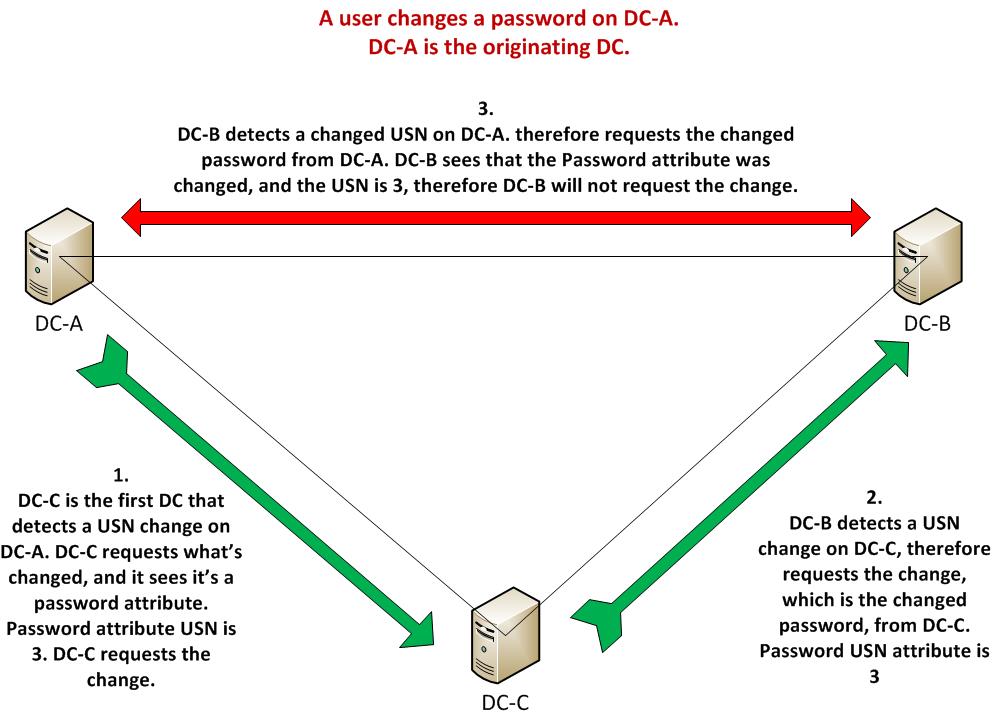 —–> DC-A looks at the high-watermark and up-to-dateness vector values, and the object that was changed, (the password attribute).
—–> DC-A sees that the originating DSA for the password change is DC-A (itself).
—–> DC-A reads the up-to-dateness vector from DC-B and finds that DC-B is guaranteed to be Up-To-Date from the change from DC-A (itself), but has a USN value of 2.
—–> DC-A sees that the originating USN is 3 on that password attribute. 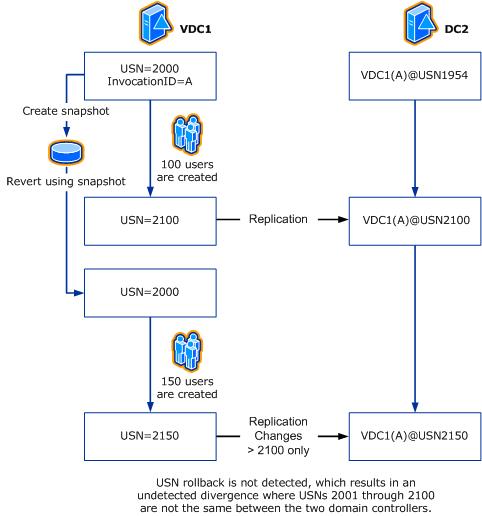 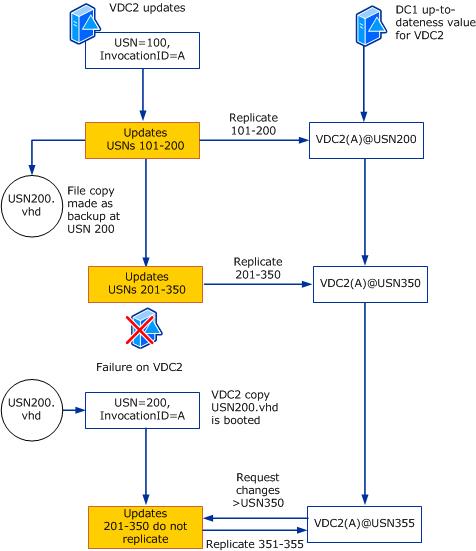 To repair a USN Rollback may be difficult. You can use the replication monitoring and diagnostic tools to determine the extent of the damage. If severe where the USN Rollback is undetected, such as when the VHD file attached to a different virtual host is copied and run on another virtual host, which will make it extremely difficult to determine the cause due to duplicate DC SID numbers, besides the rollback, or if the USN on a restored DC has increased past the last USN that the other domain controller has received. In this case, the USN values of the originating DC are different than what the replication partner believes they should be.

Reverting back to a snapshot can cause ramifications with other types of services. For one, you must keep in mind of the secure channel that is used by Active Directory members to communicate to the domain. The secured channel uses a password that gets renewed every seven days. For example, if you revert the machine back prior to the point with a previous password, it may no longer be able to communicate. To repair such a scenario, you can reset the machine account, or disjoin it then rejoin it back to the domain. For servers, such as a Microsoft Exchange server, the implications can be much deeper. Besides the secured channel, users will lose any emails that were received between the current time and snapshot time.

Until the introduction of Windows Server 2012, cloning, snapshotting, or copying, are unsupported. The only supported method to repair a DC is to potentially either using Windows Backup, or a third party backup that supports non-Authoritative or Authoritative restores, or simply force demote and rebuild the DC from scratch and promote it back into the domain. Otherwise, as we’ve discussed, snapshots and cloning have serious ramifications that can result in USN rollbacks or lingering objects, just to name a few.

Windows Server 2012 now supports DC cloning and snapshot restore of domain controllers. The requirements to support the new feature are:

How does the VM-GenerationID work?

When you promote a domain controller in a supported Hypervisor, AD DS stores the VM-GenerationID (msDS-GenerationID attribute) in the DC’s computer object in the Ad database. This attribute will now be tracked by a Windows driver in the virtual machine.

If you revert to a snapshot, the driver looks at the current VM-GenerationID value and compares it to the value in the AD database on its computer object. The comparison also occurs each time a DC is rebooted.

If the VM-GenerationID are different:

If the VM-GenerationID are the same:

This feature is domain specific. A domain must have at least one DC installed that can be copied. You still want to properly configure DNS settings, validate each DC’s health, replication status, and run the Active Directory Best Practice Analyzer after each Dc deployment.

This feature provides the following advantageous and benefits:

What if I Don’t Want the VM-Generation ID Mechanism to Kick In?

Perhaps there’s a time when you don’t want this protection, such as if you are trying to clone your environment to a lab. If you follow the rules, the VM-Generation ID will protect the USN and probably not give you what you want, and worse, if the DCs you’re trying to clone are having trouble replicating SYSVOL, you have more problems to deal with.

One way around it to prevent the VM-Generation ID to kick in at the hypervisor level is to shut down the VMs, and simply do a flat file copy to another hypervisor, then create a new VM from using the existing files.That should help the attribute mechanism from kicking in. More info on this and other thoughts: