There are a number of tools that you can use in your day to day AD and Exchange management. This includes Office 365 Hybrid, but we’ll assume that you are performing one way sync to the cloud, and only replicating MSOL attributes back to on premises, so you can manage them locally, for the most part.

This is about getting SendAs and SendOnBehalf rights on a mailbox

I hope this helps!

As many know, I work with Active Directory, Exchange server, and Office 365 engineer/architect, and an MVP in Active Directory and Identity Management, and I’m an MCT as well. I try to strive to perform my job with the best of my ability and efficiency, even when presented with a challenge, and then help others with my findings in case a similar issue arises to help ease their jobs. Share the knowledge, is what I’ve always learned.

I’ve found there are many qualified and very informative websites that provide how-to blogs, and I’m glad they exists and give due credit to the pros that put them together. In some cases when I must research an issue, I just needed something or specific that I couldn’t find or had to piece together from more than one site, such as a simple one-liner or a simple multiline script to perform day to day stuff.

I hope you’ve found this blog post helpful, along with my future scripts blog posts, especially with AD, Exchange, and Office 365.

Complete List of Technical Blogs (I may be moving the following site): http://www.delawarecountycomputerconsulting.com/technicalblogs.php

Or just search within my blogs:
https://blogs.msmvps.com/acefekay/

This posting is provided AS-IS with no warranties or guarantees and confers no rights.

Hey everyone, Ace here again. Here’s an interesting issue I came across when an administrator, while using ADSI Edit, deleted one of their Exchange 2010 servers from the Exchange Organization in AD’s Configuration Container. Of course, it was not intentional, so I didn’t even ask why or how, but I was told that they were working on something else in ADSI Edit, and the administrator unintentionally deleted the Exchange server object. And as we all know, there is no “Undelete” button in ADSI Edit.

Before I went about trying to perform an Authoritative Restore with AD, I figured I would try to use the AD Recycle Bin to recover the object. However, I knew it wouldn’t be there, because it was never deleted from ADUC Computer Container, rather it was deleted from the Exchange Organization. But I did it just to show how to do it, and to illustrate the differences in the object’s locations and significance.

What I did was is re-animated the deleted server using ADSI Edit. I used a lab machine to test it before attempted to try it on their production system.

Before I performed a test delete in my lab

Here’s VAN-EX3 in ADSI Edit and its attributes. This is what it’s supposed to look like. 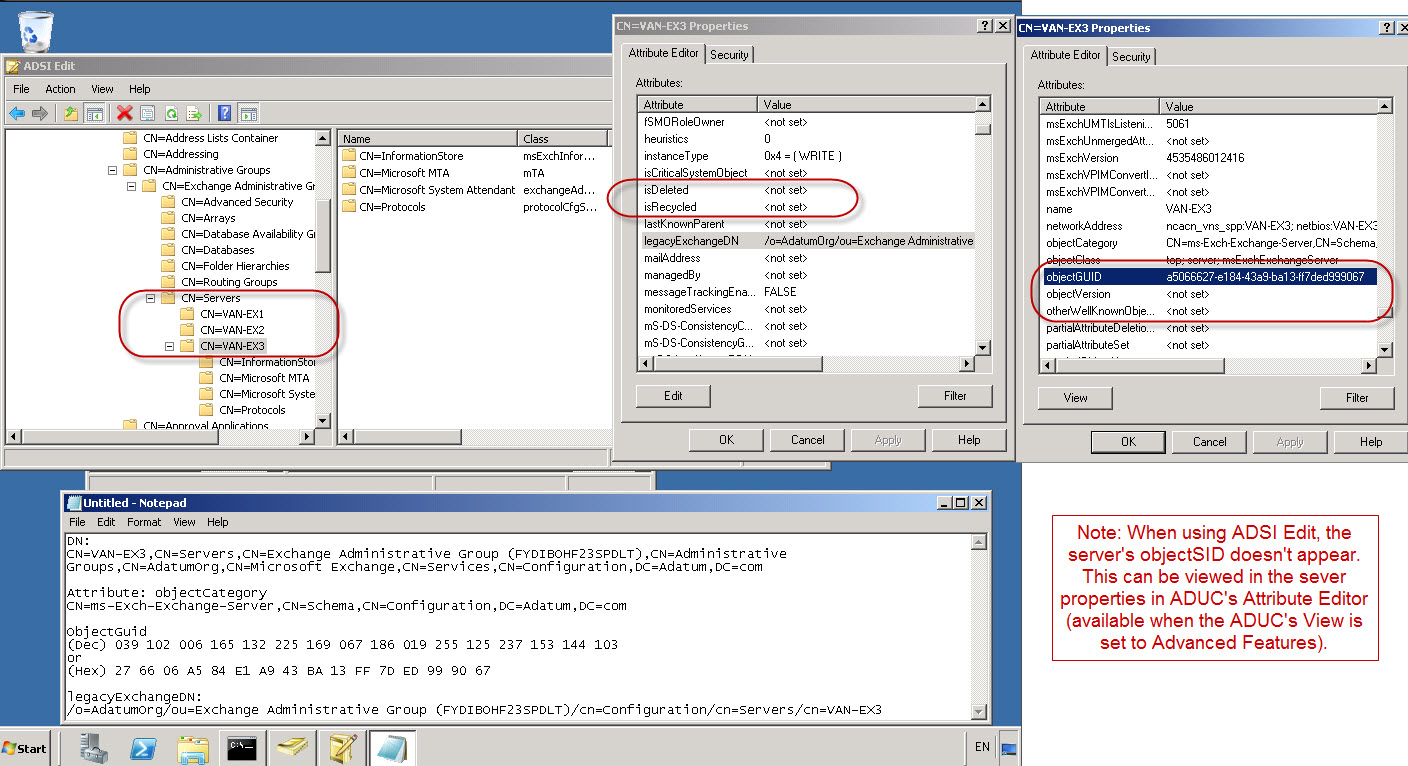 Here’s where I deleted VAN-EX3 in ADSI Edit: 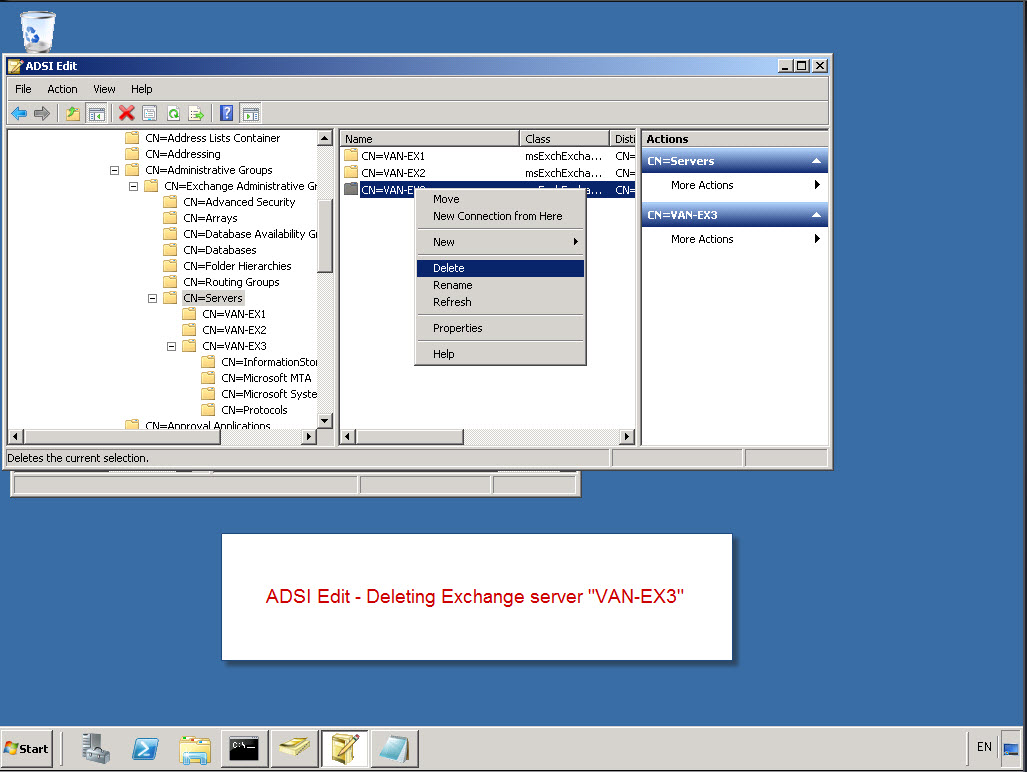 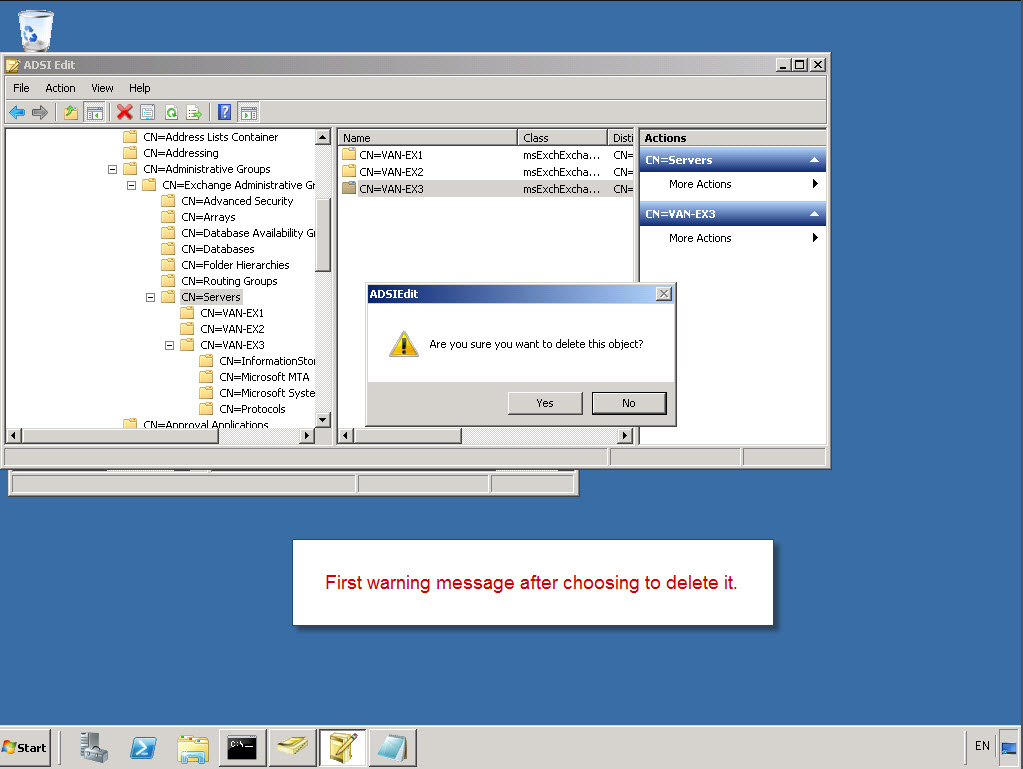 And the second delete warning message. Apparently ADSI Edit, the tool that doesn’t have an Undelete” button, wants to make sure that you want to delete it. I think it’s good that it asks twice: 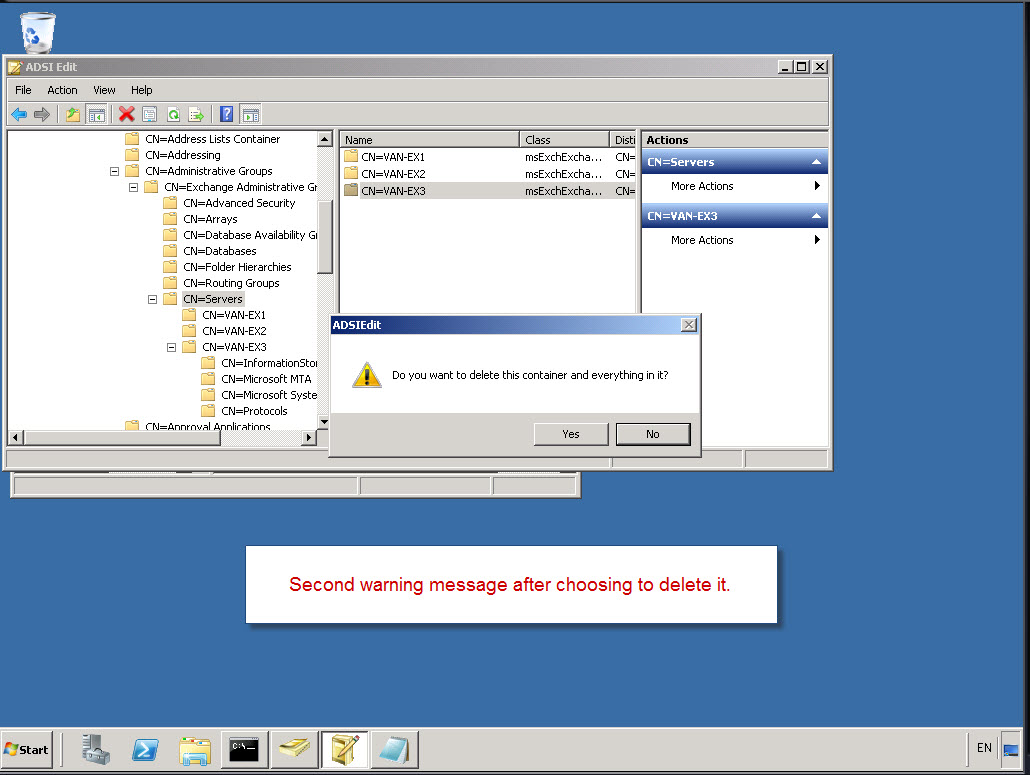 VAN-EX3 has now been deleted from the Exchange Organization section in the Configuration Container: 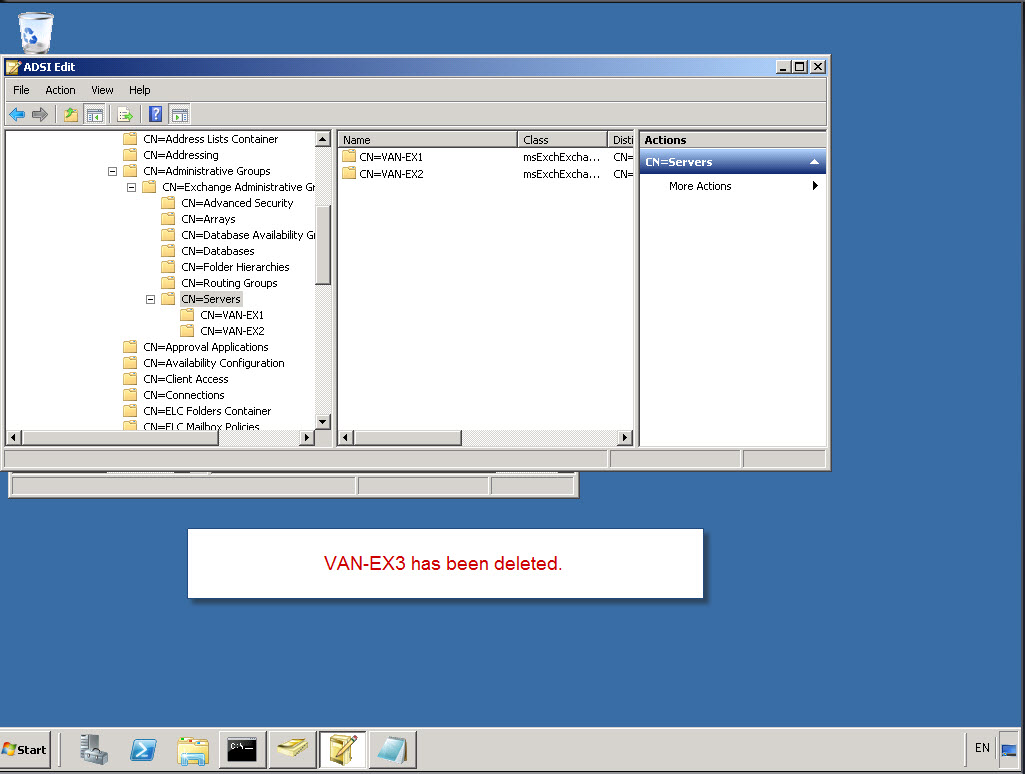 However, as you an see in ADUC, it still shows VAN-EX3. That’s because we didn’t delete it from AD, rather it was deleted from the Configuration Container. 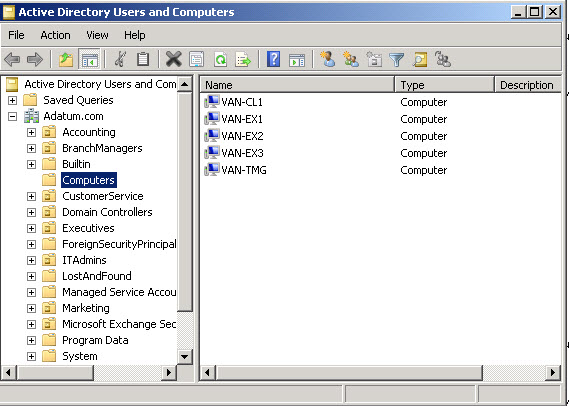 As you can see here, Exchange’s services still show that they’re still running.

These steps were more to show everyone the differences between a deleted computer object, that would show up here, and an Exchange server deleted from the Organization. 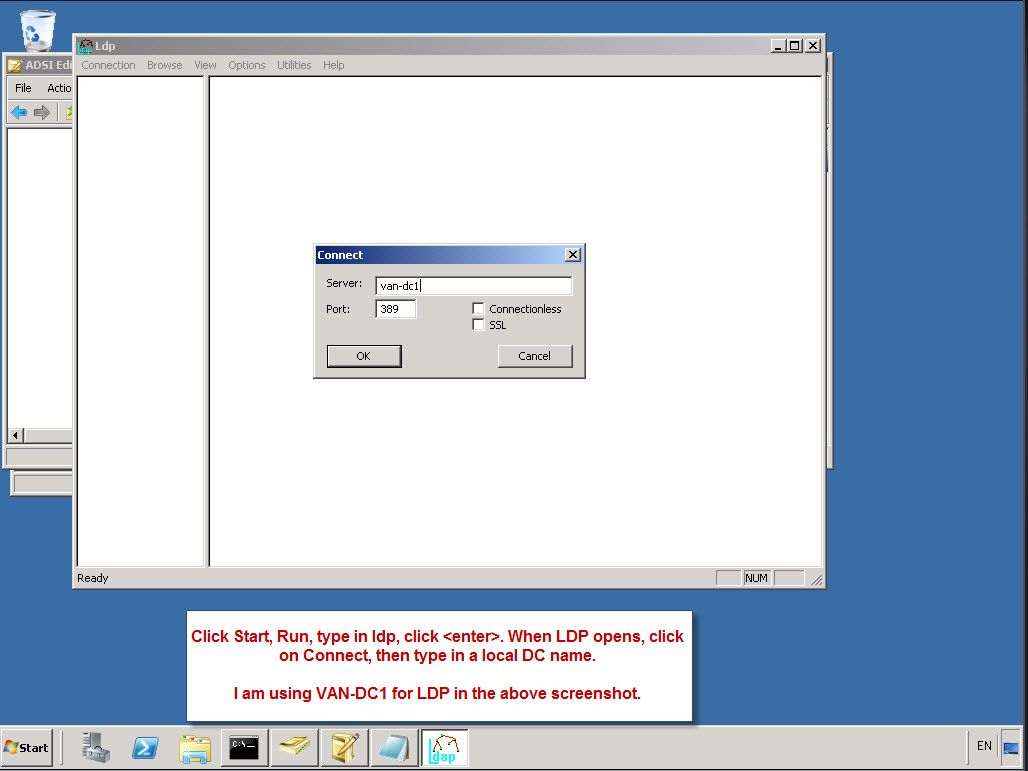 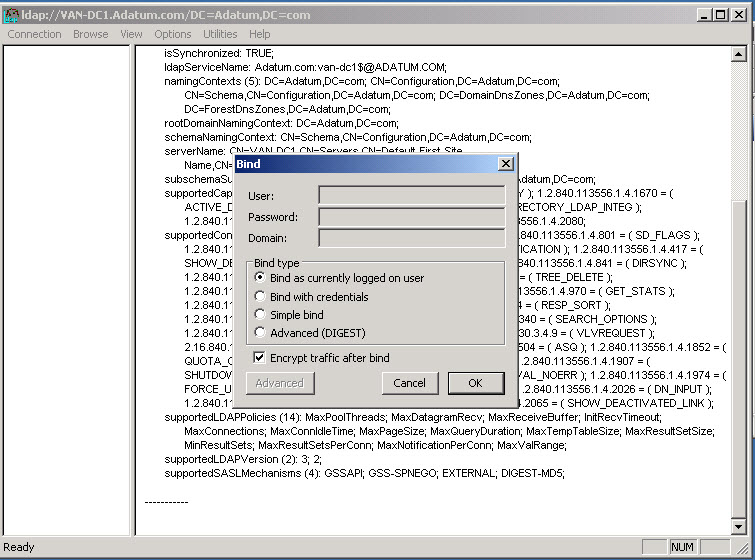 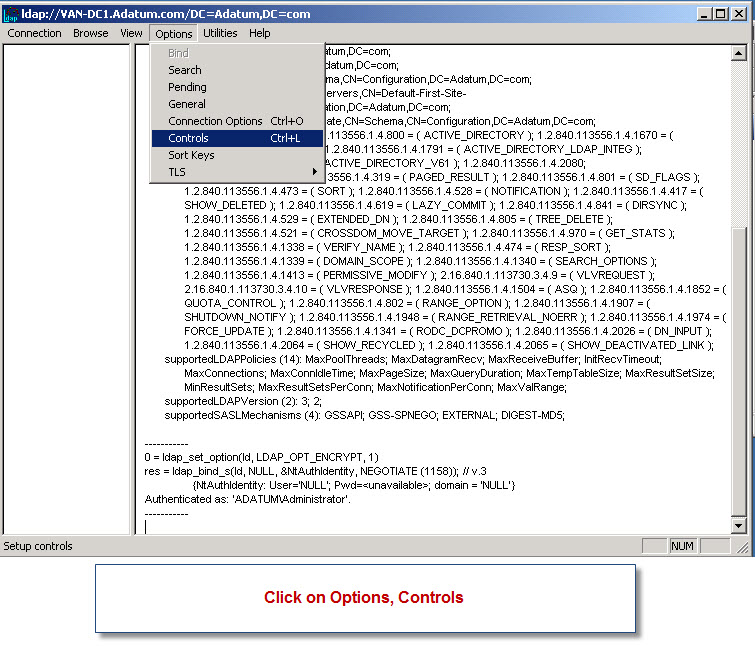 In the Load Predefined drop-down box, I chose to “Return Deleted Objects:”

As you can see, Return Deleted Objects chosen in the drop-down box: 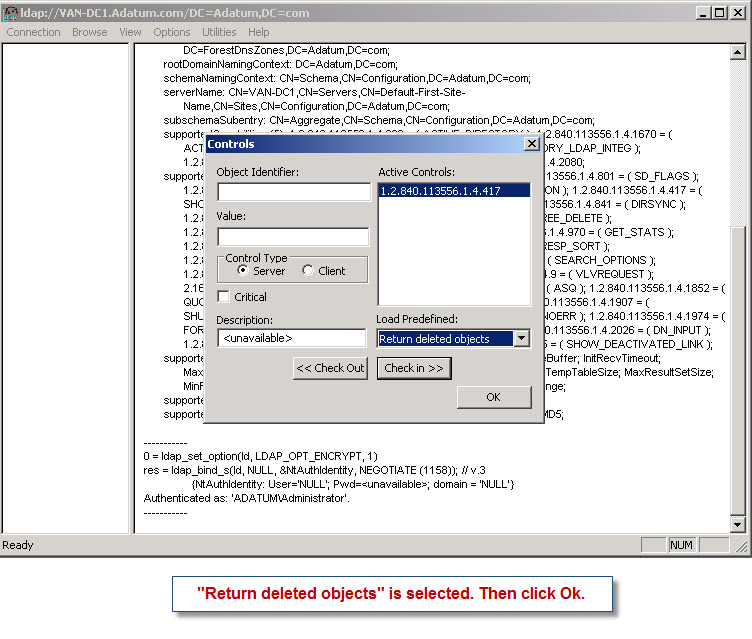 Under Tree View, for the base DN, I typed in cn=deleted objects,dc=adatum,dc-com. As you can see, nothing showed up. So VAN-EX3 is not in the Recycle Bin. 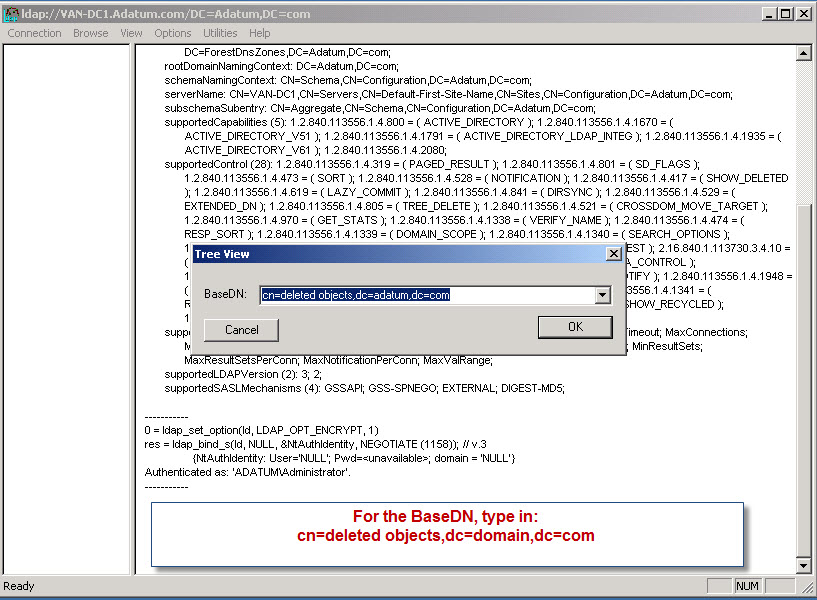 Recreating VAN-EX3 in the Exchange Organization in the Configuration Container

I drilled down into the Exchange Organization in the Configuration Container, CN=Exchange Administrative Group (FYDIBOHF23SPDLT), CN=Servers. Then I right-clicked CN=Servers, New, Object.

By the way, not to get off topic, but if you’re wondering how the Exchange team came up with that Administrative Group name, “(FYDIBOHF23SPDLT),” click here.

For “Select a Class” dialog box, scroll down and select msExchServersContainer 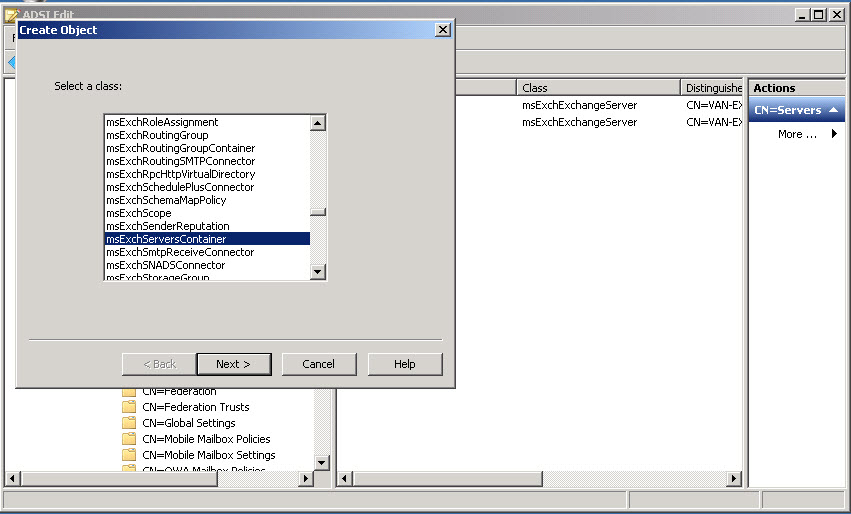 For the Value field, type in VAN-EX3: 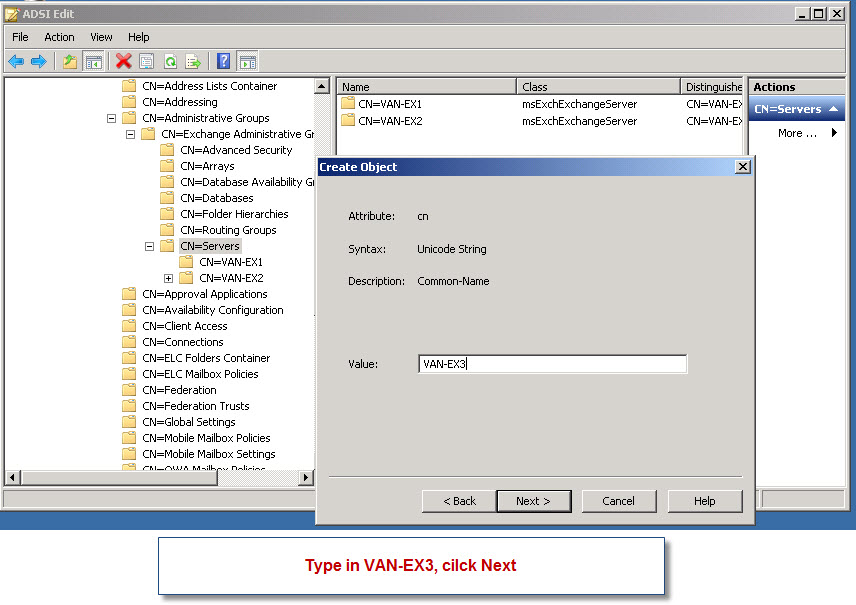 In the Select a Class dialog box, choose msExchInformationStore: 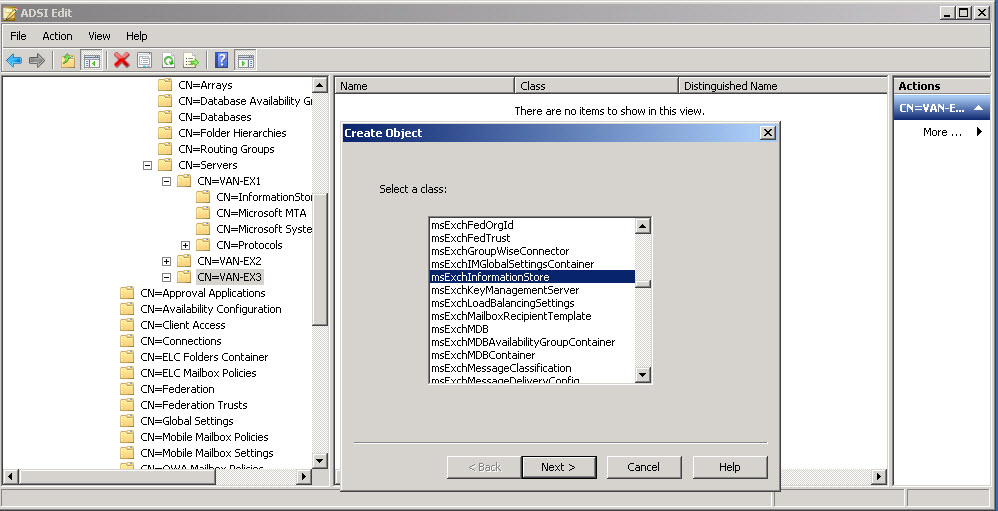 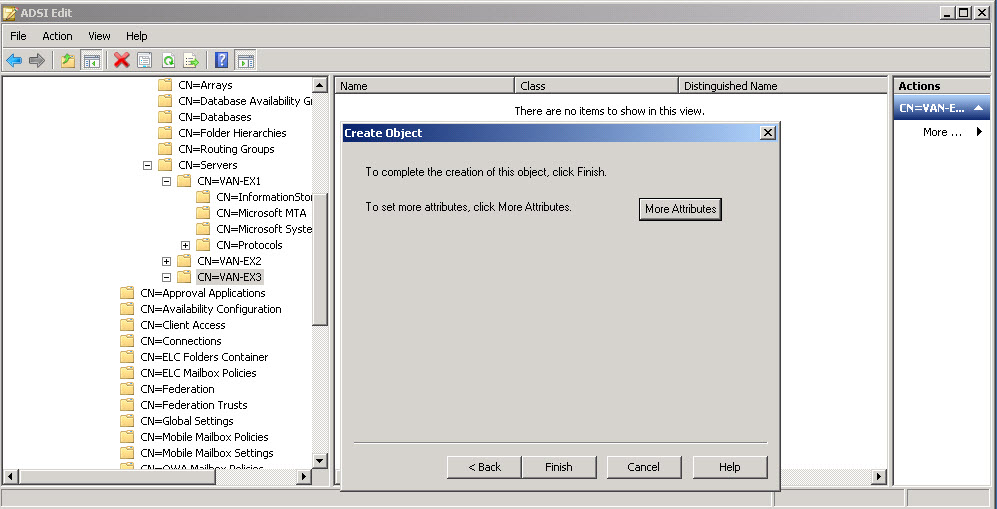 The values appear correct so far. If you double-click on the CN=Information Store object, scroll down, you can see the DN value is correct (sorry, I didn’t screenshot that part):

Now let’s create the MTA. Same deal as above, in the Select a Class dialog box, right-click, New, scroll down and choose mTA: 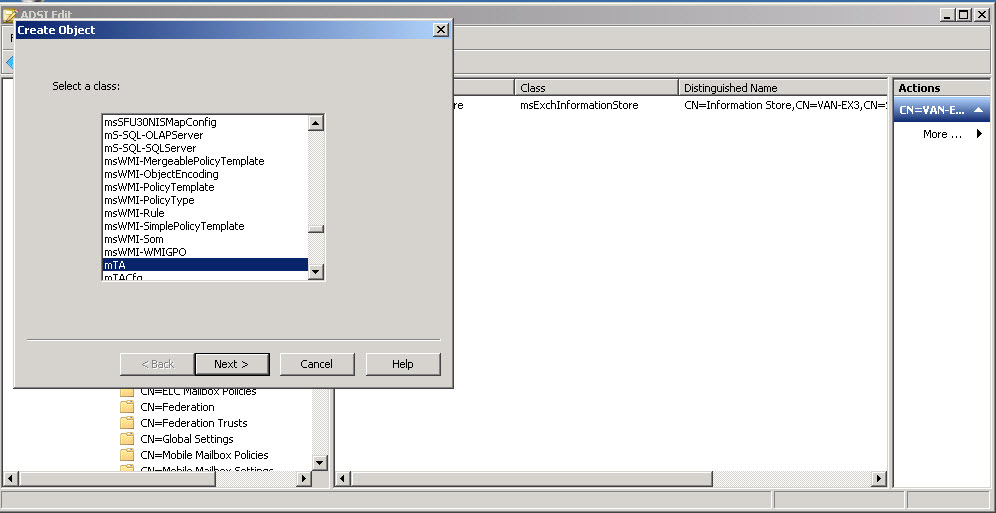 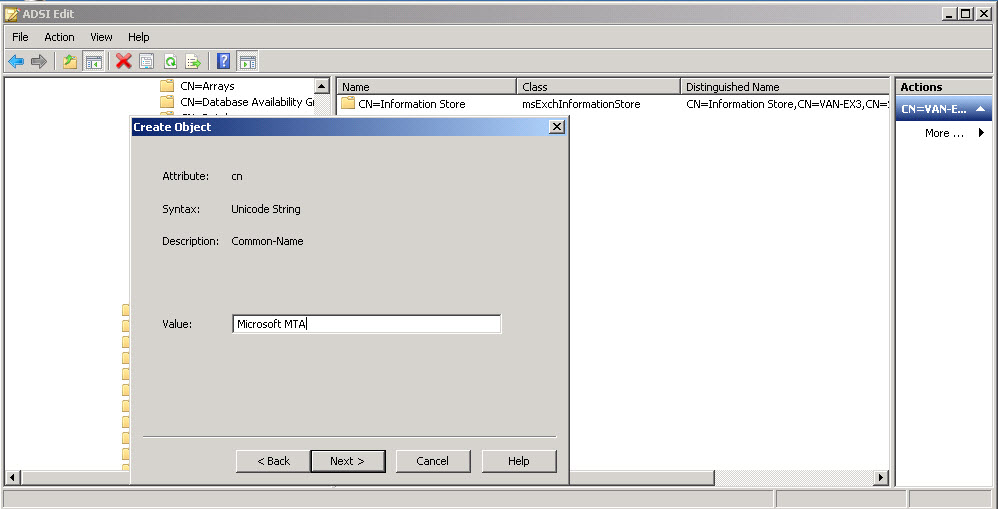 To get the time out and other values it’s asking, I opened another instance of ADSI Edit, and looked at the values for one of the other existing Exchange Servers: 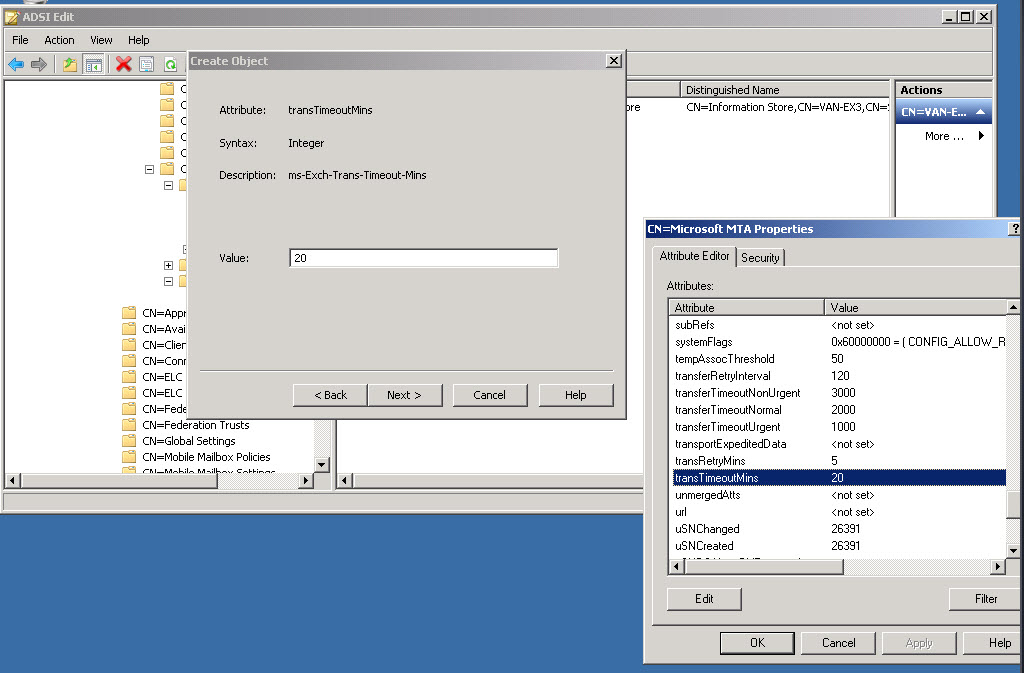 The transRetryMins value of 5 that I populated, which I found from the other Exchange server: 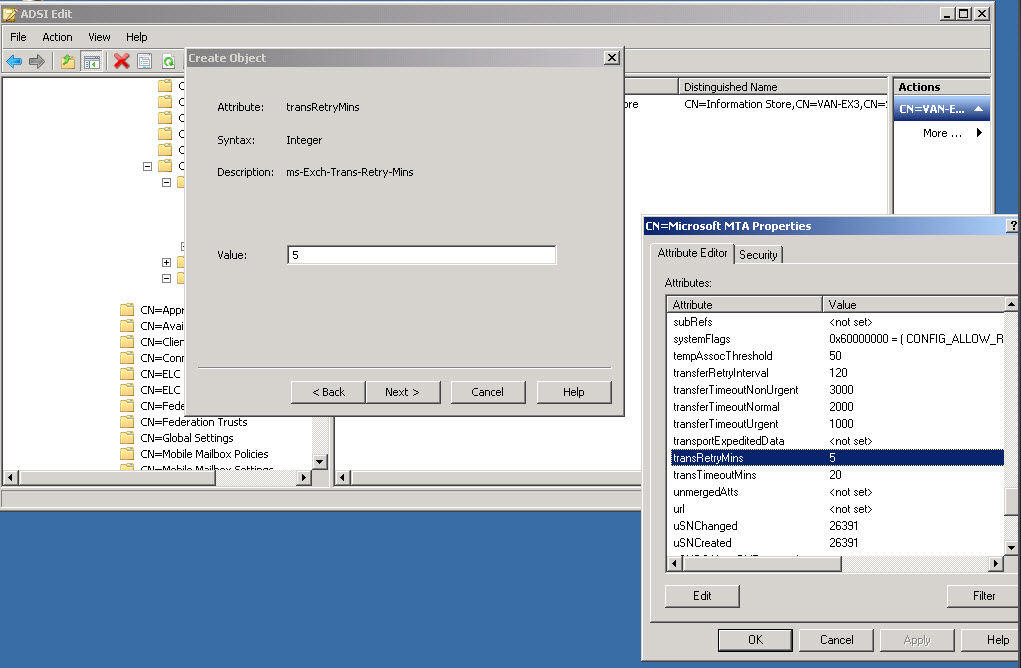 The last attribute, which of course is the server’s name:

Now we must create the Microsoft System Attendant object for VAN-EX3 by right-clicking Van-Ex3, new, choose Object, and in the Select a Class dialog box, scroll down and select exchangeAdminService: 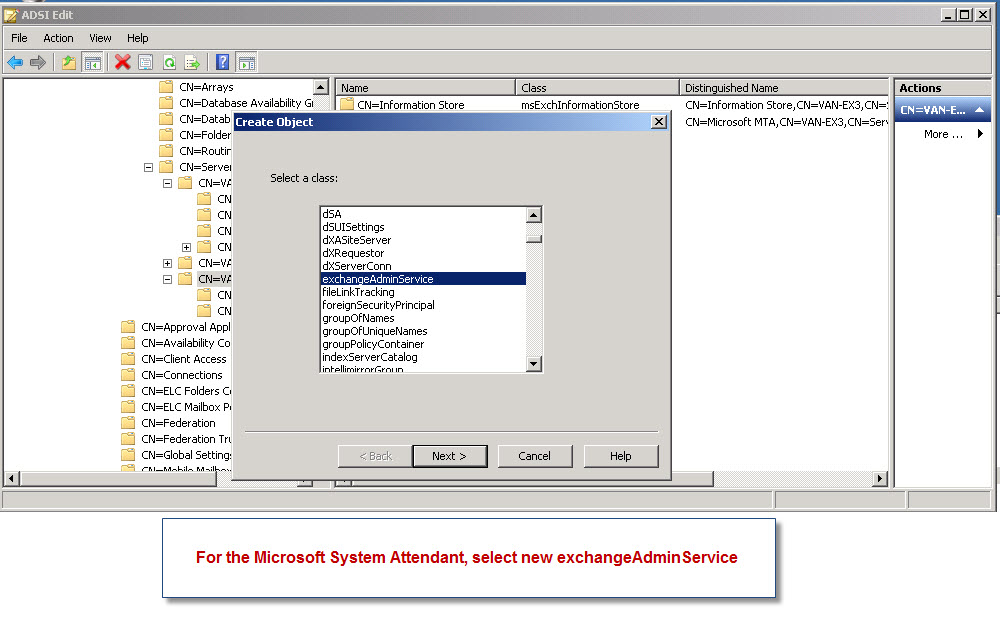 For the CN value, type in Microsoft System Attendant: 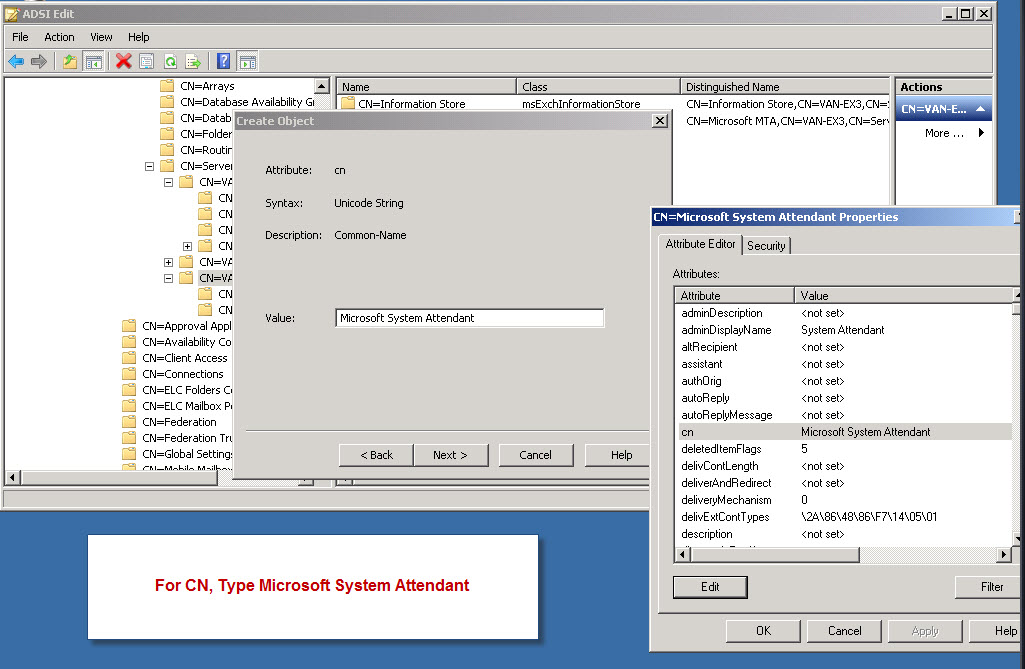 Scroll down in the Attribute Editor to deliveryMechanism, set it to 0 (zero): 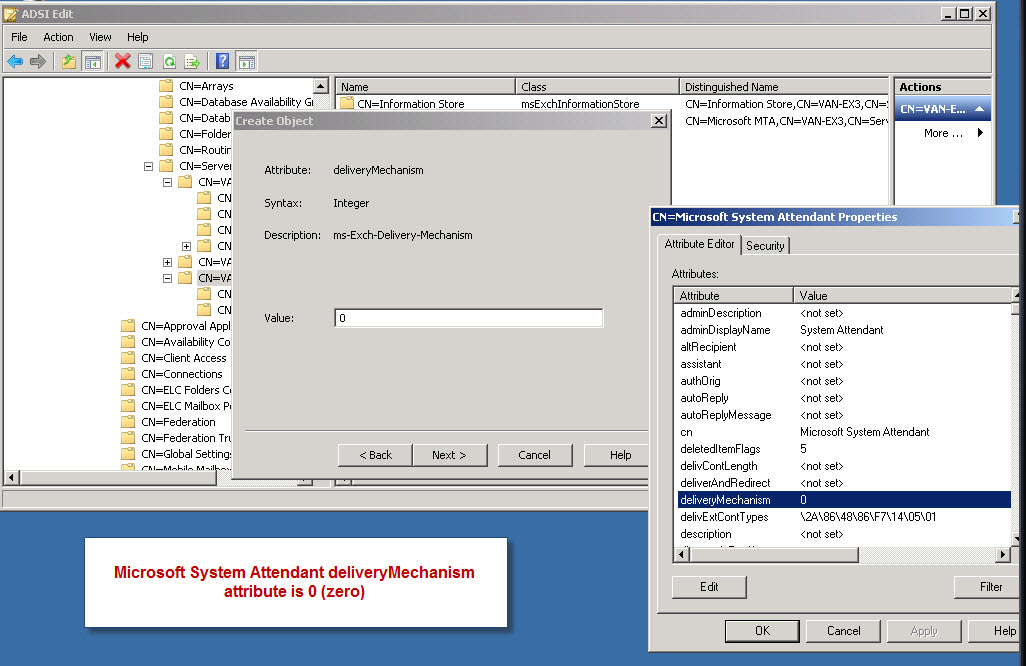 Now test logging on with a mailbox that exists in VAN-EX3, and try to send and receive an email. You should find that it works perfectly.

Point of the story: Be careful what you do in ADSI Edit. 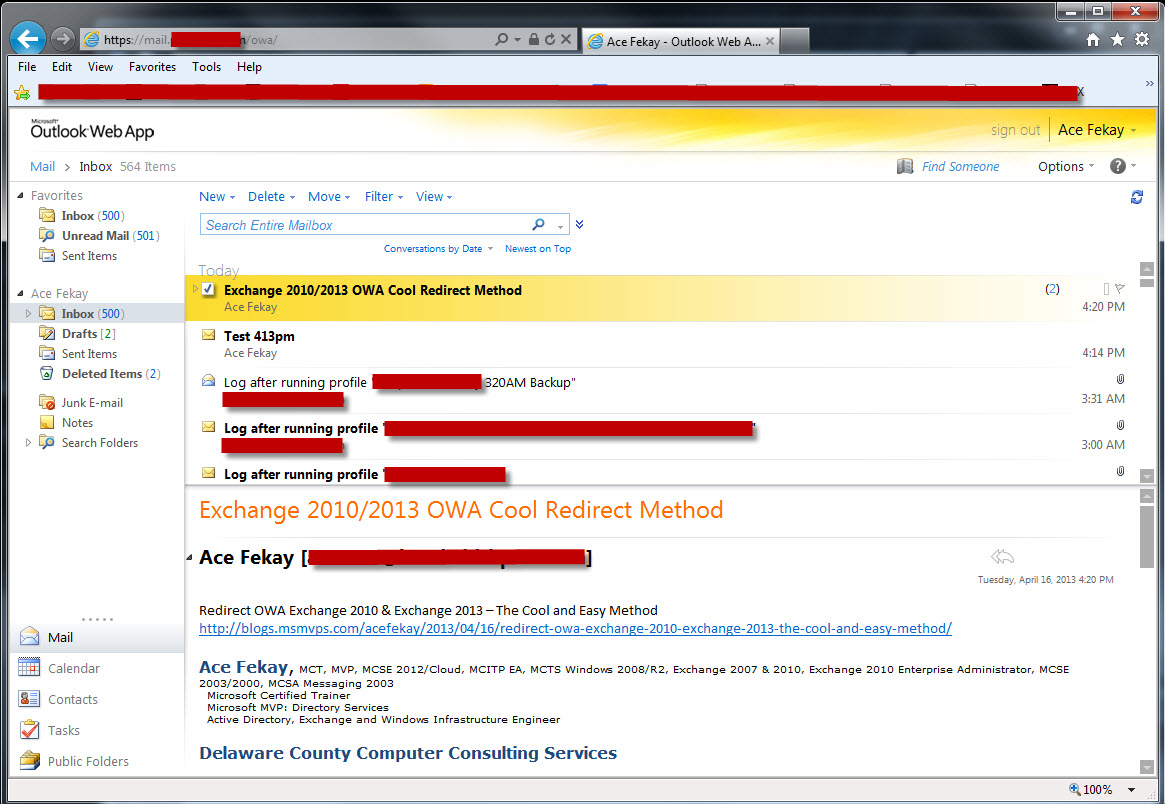 Hey everyone, Ace here again. An issue was presented to me regarding the EMC and EMS would not open on a new Exchange 2010 SP3 installation. The underlying operating system is Windows 2008 R2 SP1. I could not figure out how to resolve this issue, and not to pat myself on the back, I usually and eventually resolve something or get really close, but I was no where near close on this one, other than knowing it was an IIS issue. I eventually called Microsoft Support to assist in this scenario, instead of wasting any more of my time or the customer’s valuable productivity on the issue. That said, this will be the first time in two years that I’ve needed to contact Microsoft Support.

I was originally following Brian Desmond’s blog on how to configure the redirect, and it works great. I’ve used it for a half dozen customers without incident for the past two years. But after I saw this method, I was astonished at the ease of configuration, and it does not affect any subfolders.

The idea behind it is configuring the IIS 7 and 7.5 HTTP Redirect feature on the actual iisstart.htm file, and not for the actual Default Website. If you set it for the website, you must uncheck it for each and every sub web folder which is a pain in the butt to go through each one, and you may make a mistake that can render Exchange useless. Support call anyone?

It’s that easy. And it will not affect any of the Exchange’s necessary subfolders, or any other part of IIS.

If you want to use Brian Desmond’s which works perfectly, too, and I’ve been using it for over two years without a hitch, here it is:

How to redirect requests from HTTP to HTTPS or to the OWA virtual directory in IIS 7
Applies to Microsoft Internet Information Services 7.0
http://support.microsoft.com/kb/975341

How to redirect an HTTP connection to HTTPS for Outlook Web Access clients and how to redirect the Default Web Site to point to the Exchange virtual directory
Applies to Exchange 5.5,  Exchange 2000, Exchange 2003 (Just thought to throw this in here for anyone still on the legacy Exchange versions)
http://support.microsoft.com/kb/839357

Other related links, just to get an idea what others have suggested, but I have not tried, so I can’t comment on them. You can try them at your own risk:

Comments, corrections, concerns, and suggestions are all welcomed!