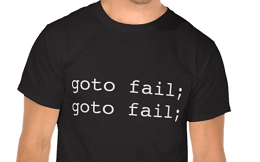 Last week, Apple released a security update for iOS, indicating that the vulnerability being fixed is one that allows SSL / TLS connections to continue even though the server should not be authenticated. This is how they described it:

Impact: An attacker with a privileged network position may capture or modify data in sessions protected by SSL/TLS

Description: Secure Transport failed to validate the authenticity of the connection. This issue was addressed by restoring missing validation steps.

Secure Transport is their library for handling SSL / TLS, meaning that the bulk of applications written for these platforms would not adequately validate the authenticity of servers to which they are connected.

Ignore ‚ÄúAn attacker with a privileged network position‚Äù ‚Äì this is the very definition of a Man-in-the-Middle (MITM) attacker, and whereas we used to be more blas√© about this in the past, when networking was done with wires, now that much of our use is wireless (possibly ALL in the case of iOS), the MITM attacker can easily insert themselves in the privileged position on the network.

The other reason to ignore that terminology is that SSL / TLS takes as its core assumption that it is protecting against exactly such a MITM. By using SSL / TLS in your service, you are noting that there is a significant risk that an attacker has assumed just such a privileged network position.

So this lack of authentication is essentially a complete failure of your secure connection.

As always happens when a patch is released, within hours (minutes?) of the release, the patch has been reverse engineered, and others are offering their description of the changes made, and how they might have come about.

In this case, the reverse engineering was made easier by the availability of open source copies of the source code in use. Note that this is not an intimation that open source is, in this case, any less secure than closed source, because the patches can be reverse engineered quickly ‚Äì but it does give us a better insight into exactly the code as it‚Äôs seen by Apple‚Äôs developers.

Yes, that‚Äôs a second ‚Äúgoto fail‚Äù, which means that the last ‚Äúif‚Äù never gets called, and the failure case is always executed. Because of the condition before it, however, the ‚Äòfail‚Äô label gets executed with ‚Äòerr‚Äô set to 0.

So, of course, the Internet being what it is, the first reaction is to laugh at the clowns who made such a simple mistake, that looks so obvious.

T-shirts are printed with ‚Äúgoto fail; goto fail;‚Äù on them. Nearly 200 have been sold already (not for me ‚Äì I don‚Äôt generally wear black t-shirts).

But really, these are smart guys ‚Äì ‚Äúbe smarter‚Äù is not the answer

There is a possibility that this is too much in evidence ‚Äì that the arrogance of those with experience and a track record may have led these guys to avoid some standard protective measures. The evidence certainly fits that view, but then many developers start with that perspective anyway, so in the spirit of working with the developers you have, rather than the ones you theorise might be possible, let‚Äôs see how to address this issue long term:

Here‚Äôs my suggested answers ‚Äì what are yours?

OK, so it‚Äôs considered macho to not rely on an IDE. I‚Äôve never understood that. It‚Äôs rather like saying how much you prefer pounding nails in with your bare fists, because it demonstrates how much more of a man you are than the guy with a hammer. It doesn‚Äôt make sense when you compare how fast the job gets done, or the silly and obvious errors that turn up clearly when the IDE handles your indenting, colouring, and style for you.

Yes, colouring. I know, colour-blind people exist ‚Äì and those people should adjust the colours in the IDE so that they make sense. Even a colour-blind person can get shade information to help them. I know syntax colouring often helps me spot when an XSS injection is just about ready to work, when I would otherwise have missed it in all the surrounding garbage of HTML code. The same is true when building code, you can spot when keywords are being interpreted as values, when string delimiters are accidentally unescaped, etc.

The same is true for indentation. Indentation, when it‚Äôs caused by your IDE based on parsing your code, rather than by yourself pounding the space bar, is a valuable indication of program flow. If your indentation doesn‚Äôt match control flow, it‚Äôs because you aren‚Äôt enforcing indentation with an automated tool.

What the heck, enforce all kinds of style

Your IDE and your check-in process are a great place to enforce style standards to ensure that code is not confusing to the other developers on your team ‚Äì or to yourself.

A little secret ‚Äì one of the reasons I‚Äôm in this country in the first place is that I sent an eight-page fax to my bosses in the US, criticising their programming style and blaming (rightly) a number of bugs on the use of poor and inconsistent coding standards. This was true two decades ago using Fortran, and it‚Äôs true today in any number of different languages.

The style that was missed in this case ‚Äì put braces around all your conditionally-executed statements.

I have other style recommendations that have worked for me in the past ‚Äì meaningful variable names, enforced indenting, maximum level of indenting, comment guidelines, constant-on-the-left of comparisons, don‚Äôt include comparisons and assignments in the same line, one line does one thing, etc, etc.

Make sure you back the style requirements with statements as to what you are trying to do with the style recommendation. ‚ÄúMake the code look the same across the team‚Äù is a good enough reason, but ‚Äúprevent incorrect flow‚Äù is better.

Make sure your compiler warns on unreachable code

gcc has the option ‚Äú-Wunreachable-code‚Äù.

gcc silently disabled the option, because they didn‚Äôt want anyone‚Äôs build to fail.

This is not (IMHO) a smart choice. If someone has a warning enabled, and has enabled the setting to produce a fatal error on warnings, they WANT their build to fail if that warning is triggered, and they WANT to know when that warning can no longer be relied upon.

So, without a warning on unreachable code, you‚Äôre basically screwed when it comes to control flow going where you don‚Äôt want it to.

And of course there‚Äôs the trouble that‚Äôs caused when you have dozens and dozens of warnings, so warnings are ignored. Don‚Äôt get into this state ‚Äì every warning is a place where the compiler is confused enough by your code that it doesn‚Äôt know whether you intended to do that bad thing.

Let me stress ‚Äì if you have a warning, you have confused the compiler.

This is a bad thing.

You can individually silence warnings (with much comments in your code, please!) if you are truly in need of a confusing operation, but for the most part, it‚Äôs a great saving on your code cleanliness and clarity if you address the warnings in a smart and simple fashion.

The compiler has an optimiser.

It‚Äôs really good at its job.

It‚Äôs better than you are at optimising code, unless you‚Äôre going to get more than a 10-20% improvement in speed.

Making code shorter in its source form does not make it run faster. It may make it harder to read. For instance, this is a perfectly workable form of strstr:

Can you tell me if it has any bugs in it?

What‚Äôs its memory usage? Processor usage? How would you change it to make it work on case-insensitive comparisons? Does it overflow buffers?

Better still: does it compile to smaller or more performant code, if you rewrite it so that an entry-level developer can understand how it works?

Now go and read the implementation from your CRT. It‚Äôs much clearer, isn‚Äôt it?

Release / announce patches when your customers can patch

Releasing the patch on Friday for iOS and on Tuesday for OS X may have actually been the correct move ‚Äì but it brings home the point that you should release patches when you maximise the payoff between having your customers patch the issue and having your attackers reverse engineer it and build attacks.

Where is the security announcement at Apple? I go to apple.com and search for ‚ÄúiOS 7.0.6 security update‚Äù, and I get nothing. It‚Äôd be really nice to find the bulletin right there. If it‚Äôs easier to find your documentation from outside your web site than from inside, you have a bad search engine.

People who know me may have the impression that I hate Apple. It‚Äôs a little more nuanced than that.

I accept that other people love their Apple devices. In many ways, I can understand why.

I have previously owned Apple devices ‚Äì and I have tried desperately to love them, and to find why other people are so devoted to them. I have failed. My attempts at devotion are unrequited, and the device stubbornly avoids helping me do anything useful.

I feel like Steve Jobs turned to me and quoted Dr Frank N Furter: ‚ÄúI didn‚Äôt make him for you.‚Äù

So, no, I don‚Äôt like Apple products FOR ME. I‚Äôm fine if other people want to use them.

This article is simply about a really quick and easy example of how simple faults cause major errors, and what you can do, even as an experienced developer, to prevent them from happening to you.