I’m happy to announce that development/testing of the next version of the SharePoint Content Deployment Wizard is now complete, and the new release has been uploaded to Codeplex. If you’re not aware of the tool then Introducing the SharePoint Content Deployment Wizard is a good place to start. I’m calling this release "beta 2", which indicates the tool is by no means complete, but is significantly more mature than the original version. I’d encourage all of the 1400+ people (and counting) who downloaded the original in the past few weeks to get the latest version – the link is at the bottom of this post.

So let’s run through the improvements:

In terms of issues reported in the first release, it seems that 95% of them have been related to the underlying Content Migration API provided by SharePoint rather than the actual Wizard – this means the issue would also likely surface if out-of-the-box Content Deployment (via Central Admin) or STSADM -export was used to deploy the content instead. This is in line with what I was expecting since in many ways the Wizard doesn’t actually do that much – it just presents a nice UI (with the ability to cherry-pick exactly which items should be deployed) onto existing SharePoint code. Since there are some gotchas with the MS bits however, it does mean that understanding how their API works can help when using the Wizard. My recommended reading list for those wanting to know more would be:

I’ve had great feedback so far (ranging from feature requests to "why the hell don’t you charge for this thing?!" to offers of collaboration). In terms of features, it looks like incremental deployment is the most popular vote so far so I’m hoping to add this fairly soon. Another possibility is making the Wizard scriptable by refactoring the code into something more tiered, thus providing features like the ability to save configurations for import/export jobs and also allowing them to be hooked up to a task scheduler in some way.

However, the more feedback the better and if you’d like to see particular functionality or have run into problems trying to use the tool I’m definitely keen to hear. Either leave a comment on the blog or over at the Codeplex site.

Go to www.codeplex.com/SPDeploymentWizard and go to the releases tab to download the latest version. Hope you find it useful.

What I wanted to do today is run through is wrap up my series of workflow posts, by running through some of the issues I hit during development. If you’re into workflow, you may have seen Rob Bogue’s excellent 10 issues (and resolutions) for SharePoint+Workflow – this post is something of an extension to Rob’s. It probably makes for rather dry reading, but will hopefully be useful to those Googling for specific problems.

For completeness, some other common issues which are well documented in other sources are:

So hopefully that’s of some use to workflow developers. If you haven’t seen it already, there’s a lot more goodness (sample code, tips and tricks etc.) in my workflow resources pack from the workflow deep-dive presentation I did at the UK SharePoint user group earlier this year.

Our client through an interesting curve ball at us midway through my workflow project. We were probably 70% code complete, when it was realised the design had no provision for a certain scenario. The workflow is triggered by a user completing an InfoPath form – this has many input controls to collect data, and several of them are dropdowns which dictate the particular path through the workflow which occurs. One such dropdown looks something like:

The value selected is evaluated by IfElse conditions in the workflow – if "type 1" is chosen, we go down a particular branch, if "type 2", a different branch and so on. Now for this particular dropdown, we realised we hadn’t specified what should happen for the "both" condition (that’s agile for you!). The new requirement which arose was that notifications and tasks should go to to two teams (i.e. both of them), and after further discussion we decided it would be appropriate to kick off two separate workflows, one for each team.

Most workflow frameworks can deal with this by using ‘child’ workflows, and Workflow Foundation is no different. After a couple of hours refactoring the implementation to use this approach, my proof-of-concept looked like: 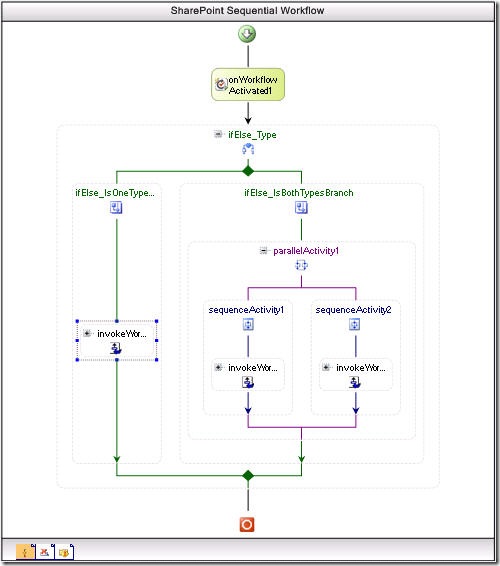 I tried a couple of things, the image above shows using a sequential parent workflow (though the child workflow is state-machine), but couldn’t get this to work. Using the debugger I could see that the child workflows were being initialized – I could step through InitializeComponent(), but breakpoints in ‘OnWorkflowActivated’ were never hit – the event wasn’t raised. The SharePoint log showed:

Time for some lateral thinking.

We know that we will definitely have two workflows if two completed InfoPath forms are added to the document library, so I asked the client what they thought of getting the system to split a "both" request into two separate items – this would mean having two separate InfoPath forms in the list. The answer was "actually that’s probably better for the users come to think of it", so the solution I came up with was:

On the last point, I considered that the SharePoint team may have set workflow to execute first for a reason, but then again it’s just another event receiver and SharePoint does not prevent this reordering (in the same way it does with some other changes, such as deleting the welcome page from a web for example). In any case, we’ve tested pretty extensively and the solution hasn’t missed a beat.

In case it’s useful, the following code can be used to duplicate and modify a file – this could be used in a list receiver (as in my case) or in ad-hoc code. I used simple string manipulation to perform the modification since InfoPath forms are just XML, and also because using XML-handling methods caused issues with the ‘proprietary’ InfoPath declarations. Simply replace the string replacement line with your own processing.

P.S. If anyone is using InvokeWorkflow in a SharePoint workflow, leave a comment 🙂