I don’t often do "a funny thing happened to me on the way to configuring a SharePoint farm recently"-type posts, but I’m making an exception here – this issue not only took a bit of figuring out, it’s also kind of interesting! This is partly because SharePoint doesn’t do what you’d expect it to do under the circumstances, and you could probably chase your tail for a while on this one if you didn’t think it through.

At first it seemed like an issue with the site definition. I was thinking that the hosting company had missed a deployment step to STSADM upgradesolution on the .wsp containing the site definition, but accessing the servers showed the latest files in place. I knew that because search configuration hadn’t been done yet, the hosting company hadn’t yet created the SSP – this was their next task. I couldn’t initially see a link between the SSP and workflow (since SharePoint workflows execute in the w3wp.exe process), but then I started wondering if there was any indirect link, and came up with this as a chain of dependencies: 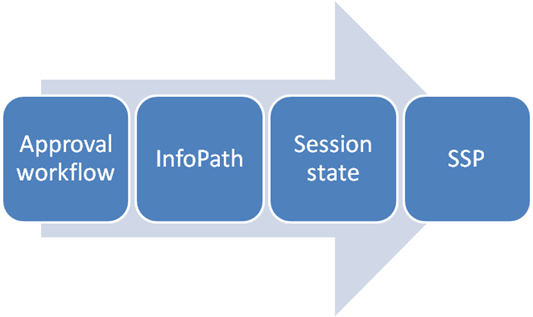 Could it be that the sites didn’t have workflow enabled because the SSP wasn’t there at time the sites were provisioned? Sounds plausible, but then I thought hang on – surely what would happen is that workflow associations and so on would be there as usual, but when a workflow form is accessed it would error with the familiar message that session state must be configured:

Well, as you might have gathered, the answer is no, this isn’t what happens! SharePoint genuinely will not (or cannot) add the workflow associations to your lists/libraries, and furthermore they will not magically appear when your SSP is created. You will need to go back and configure workflow on each list/library (or content type) either through the UI or with code.

So the moral of the story is:

Create your SSP before any sites are provisioned!

So, you’re in the early stages of your project and coding has started. It’s already becoming apparent that some abstraction is needed for accessing data in a few key lists, but you’re not sure what. Of course there’s no ‘one-size-fits-all’ answer to this question, but let’s run through some options:

In my mind the best answer to this question is probably one of the first two – particularly on projects which are building something like a traditional application (i.e. with a domain model and entitities which are tied to data) on top of SharePoint, as opposed to projects which are doing say, simple WCM. However, like me, maybe you’ve still not spent significant time looking at LINQ4SP (and maybe have memories of the original LinqToSharePoint incarnation not quite making it to maturity) and are either in the same position with the P&P samples or are thinking it looks a little too enterprise for your current needs. And on a small project with a short dev cycle, I wouldn’t blame you.

So onto other options – in terms of building your own DAL, well of course it’s possible, but if you’re on a smallish project then presumably finding the time to hand-code an abstraction for all your data needs is going to be tricky. Additionally I’m not too fond of this approach – I’ve just seen it done poorly by others too many times, resulting in a layer which performs badly/doesn’t scale because objects aren’t disposed correctly/doesn’t provide the convenience it was intended to. And finally, as far as the ‘do nothing’ option goes, although we might not be striving for the ultimate pattern we are trying to avoid the duplication, inconsistency and maintenance nightmare that could come if we allow each developer on the project to work with the data how they like.

What I’ve used a couple of times is an ‘in between’ approach – specifically, in between doing nothing and building a complex DAL. What I’m showing here isn’t exactly what I’ve used (made a couple of ‘improvements’ as I was tapping it out!), but I think of it as a very quick, lightweight pattern which at least helps reduce the worst of the problems:

This means the calling code (in a SharePoint web context) looks something like this:

To me, this approach has a good "bang for buck" because it’s extremely quick to implement but does make the situation drastically better in team development.

Passing the SPWeb object is key:-

In my article Disposing SharePoint objects – what they don’t tell you, I highlight the difficulties of keeping track of objects to dispose in a complex class library. However, I’m now starting to see the code I used as an example there as something of an anti-pattern.  The simplified code sample I used to demonstrate the problem was:

In this structure, internal API code (i.e. the DoSomething() method) is responsible for obtaining the SPWeb object needed to find the list, which generally means it is also responsible for it’s disposal. And this is where the difficulties arise. However, if the caller has to provide the IDisposable objects, it can then be responsible for calling Dispose() because it knows when they are no longer needed. Most often the caller will simply be passing a reference to SPContext.Current.Web, but if the caller happens to be a Feature receiver then SPFeatureProperties.ListItem.Parent.Web would be passed, or if no existing SPWeb object was available to the caller (e.g. console app) a new SPWeb object would have to be instantiated and passed. Disposals then become much simpler because they can always happen in the same place as any instantiations.

I’m sure there are better patterns out there, but even a simple approach like this provides much more structure than leaving it all to the caller (particularly when the calling code is being written by different developers!). For me the key thing is to standardize how code in your codebase accesses list data – much better than having field and list names dotted here, there and everywhere. One thing the approach doesn’t specifically consider is unit-testing – the sample projects in the Patterns & Practices stuff look useful here, and I for one will be getting better-acquainted!

P.S. Thanks to Rob Bogue for helping me crystallize these thoughts, and apologies to Sezai Komur for not getting round to mailing a draft through earlier as I promised!