If you’re ever asked to build a multi-lingual site in SharePoint, it quickly becomes apparent that there are a few extra considerations compared to a single language site. These could include:

..and so on. Clearly these are decisions which will have a different ‘answer’ for every multi-lingual project, and typically your client’s specific requirements will steer your approach. However one challenge which is likely to remain constant across most such projects is this one:

This is the challenge I’m focusing on here. To illustrate, here’s an example from the BBC site where I’ve highlighted all the strings which may need to be translated but which don’t belong to a particular page: 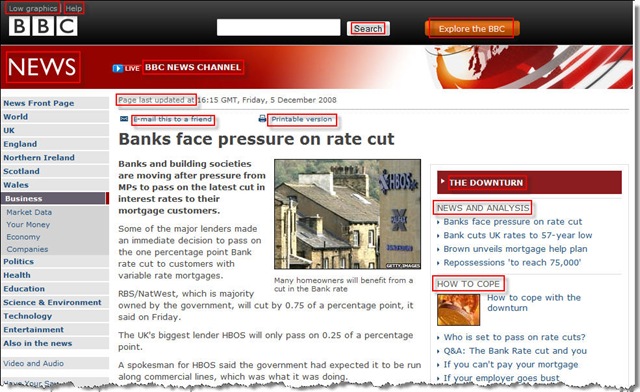 ..and that’s just one page – it turns out a typical site will have many of these. If you have to translate additional strings shown to authors in edit mode only, you could easily find the total number stretching into the hundreds. So we start to need a framework for storage/retrieval of these ‘page furniture’ items. If we were dealing with a shrink-wrapped product, .Net resource files could be a good choice, but this approach is probably not flexible enough for a website and won’t allow content authors/power users to enter translations. Clearly something based around a SharePoint list is called for, so enter the ‘Language Store’ – my solution to the problem which you can now download from Codeplex (link at the end).

The Language Store is an adaptation of my earlier Config Store solution and follows some of the same principles:-

Items in the list are categorized, and have a column for each language translation:

Note that each translation column in the list is named with the convention ‘LANG_<culture name>‘ (N.B. you might know a ‘culture name’ as a ‘locale ID’ or similar) – so when a new language needs to be added to the site, you simply create a new column with the appropriate name and add the translations. A list of culture names can be found in the MSDN documentation for the CultureInfo class.

To retrieve a value, we simply call the GetValue() method and pass the category and title of the item to retrieve:

Also, since many of the items we might put in the Language Store are only used in the presentation of the page, it’s often a shame to have to switch to the code-behind just to fetch these values and assign them to a control’s ‘Text’ property. So I’ve provided a tokenized method similar to SPUrl, which allows you to simply drop Language Store values into your markup like this:

I like this because it means you don’t end up cluttering your code-behind with lots of lines just for fetching values from the Language Store and assigning them to ASP.Net labels or controls. For those who don’t know how this is done I’ll write more about it in the next post as I think it’s a cool, under-used facility in .Net.

How the Language Store determines which language to retrieve

In the current implementation, the regional settings of the SPWeb are used to determine which translations are retrieved. It’s a single method in the code (a single line in fact!), so this scheme could easily be changed if you have a different requirement. We’re using the Language Store on our current project, and using the SPWeb setting makes sense for us since we’re building around 100 different sites in ~30 languages, as opposed to one site which displays in the local language (according to the user’s thread culture or similar).

Note that if the Language Store doesn’t contain a value for the requested culture, a fallback process is used similar to .Net’s globalization framework:

This is useful where some items might have a different version for say American English (EN-US) and British English (EN-GB), but other items don’t require distinction so a single value can be entered into the parent column (EN).

By the way, if you’re wondering where the SPWeb regional settings are because you’ve never needed to change them, they’re here:

A checkbox allows the regional settings you make on a given web cascade down to child webs, so we simply set this at the root of the site as a one time operation.

Other bits and pieces

You can download the Language Store and all source code from www.codeplex.com/SPLanguageStore. All feedback welcome!