In my last post Optimization, BLOB caching and HTTP 304s, I did a fairly lengthy walk-through on an issue I’d experienced with SharePoint publishing sites. A few people commented, mainly saying they’d noticed the same thing, but there have been further developments and findings I wanted to share!

Under certain circumstances some files in SharePoint are always re-requested by the browser despite being present in the browser cache (“Temporary internet files”). Specifically this is observed for files stored in the Style Library and Master Page Gallery, for anonymous users. Although SharePoint responds with a HTTP 304 to say the cached file can indeed be used (as opposed to sending the file itself again), we effectively have an unnecessary round-trip to the server for each file – and there could be many such files when all the page’s images/CSS/JS files are considered. This extra network traffic can have a tangible impact on site performance, and this is magnified if the user is geographically far away from the server.

Waldek and I have been tossing a few development matters around recently over e-mail, and he was curious enough to investigate this issue for himself. After reproducing it and playing around for some time, Waldek discovered that flushing the disk-based cache seems to cause a change in behaviour – or in layman’s terms, fixes everything. To be more specific, we’re assuming it’s a flush of the BLOB cache which is having the affect – in both Waldek’s test and my subsequent validation, the object cache was also flushed as well:

After the OK button is hit on this page, the problem seems to go away completely, so now when the page is accessed now for the first time as an anonymous user, the correct ‘max-age’ header is added to the files (as per the BLOB cache declaration in web.config) – contrast the ‘max-age=86400’ header on the Style Library files with what I documented in my last post: 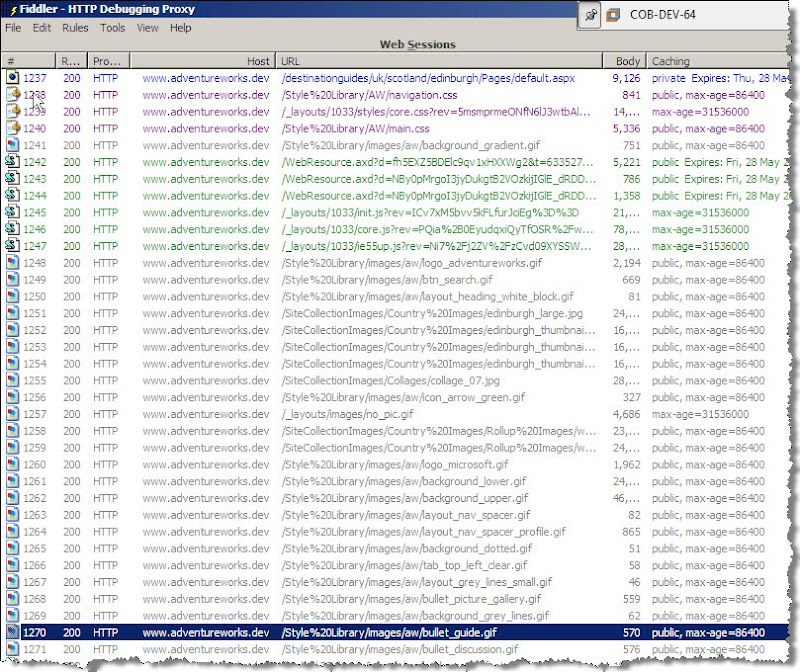 This means that on subsequent requests, the Style Library files are served directly from the browser cache with no 304 round-trip:

This is great news, as it means the issue I described is essentially a non-issue, and there is therefore no performance penalty for storing files in the publishing Style Library.

I’m now wondering if this is just a ‘gotcha’ with BLOB caching and publishing sites. I know other people have run into the original issue due to the comments on my previous post, and interestingly enough one poster said they use reverse proxy techniques specifically to deal with this issue. Could it really be that everybody who sees this behaviour just didn’t flush the BLOB cache somewhere along the way, when it’s actually a required step? Or is the testing that Waldek and I did flawed in some way? Or indeed, was my initial investigation flawed despite the fact others reported the same issue?

I am interested to hear from you on this – if you can reproduce the problem I’ve described with a publishing site you’ve developed, does flushing the BLOB cache solve it for you as described here? Leave a comment and let us know!