Back now from a short break from blogging for a holiday and some preparation for SharePoint 2010. One of the things I’ve been working on recently is the latest release of my SharePoint Content Deployment Wizard – this has just been uploaded to Codeplex. In this release (2.5 beta) I focused on adding support for a couple of things that were common feature requests, and which should hopefully make the tool more useful for users which have these requirements. As you’ll have guessed from the title of this post, probably the biggest one is incremental deployments, but there are a couple of other useful things in there too.

This is something that some folks have asked for for a long time. If you are doing regular updates using the Wizard for a set of content (perhaps using the command-line support added in release 2.0), it’s often preferable to only deploy the content which has actually changed. This is now possible, and is done by selecting ‘ExportChanges’ from the ‘Export method’ dropdown on the export settings screen: 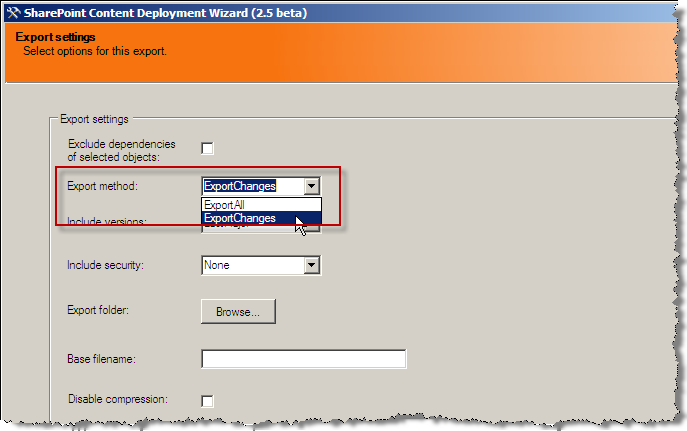 Confusingly you might have noticed the option was in the dropdown in previous releases, but it now does what it should.

Incremental deployment relies on SharePoint’s change log – the queryable store which several pieces of SharePoint use to know what content changed when. A change token can be used as a “point in time reference” which is used to identify changes after certain point, and the Wizard now stores a change token each time you perform an incremental export. When you next perform an incremental export for the same scope, the Wizard retrieves the last token for this content which is then used to ensure only changed content is deployed. Some key points here are:

Another new feature is the option for turning off the file compression which happens by default in SharePoint content deployment. When exporting a large amount of content, you will have seen that a series of files are generated, each of which is no larger than 25GB (note this is actually a configurable number, though I’ve not yet seen the requirement to expose this in the Wizard). Most of the time, you might not care about this, but the situation where it does become important is where the server doesn’t have enough memory to deal with the compression process. This could be because an extremely large site collection is being exported, or because the server just doesn’t have a lot of available memory.

To disable file compression, use the new checkbox shown below: 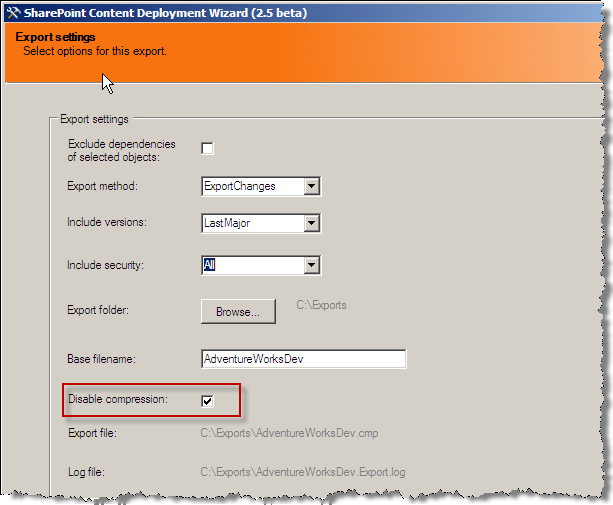 Support for exporting the root web only

Previous versions of the Wizard actually didn’t support the scenario where one wants to export only the root web of a site collection. This is because the treeview only gave one option for the root node – ‘Export entire site’. This meant that when you selected this but really only wanted the root web, what you ended up getting was the entire site collection – which unsurprisingly has confused people in the past. This has now been fixed, the context menu now has an extra level where it’s possible to select just the root web:

The new features of this release are:

The latest 2.5 beta of the Content Deployment Wizard can be downloaded from Content Deployment Wizard Release 2.5 beta. As soon as I feel enough people have used this version without issues I’ll remove the beta label, as I know some folks care about this even for Codeplex utilities. As always, if you run into any problems leave me a message on the Codeplex site and I’ll do my best to help.