For those of you who have been following the news, my first book in our new series, iOS App Development for Non-Programmers is now available in Kindle Edition on Amazon!

As it turns out, rather than writing a single book, I’m releasing a series of books. After realizing I had 3,000 pages worth of material, I knew that a book series was the way to go! Ultimately, I don’t think it’s realistic that a non-programmer is going to learn everything they need to know from a single book…those of us who are professional developers learned over a period of time, step by step.

We have already produced versions of Book 1 and Book 2 for the iBookStore, but Apple is notorious for taking weeks (or months) to approve book titles (Amazon only takes 12 hours). Ultimately, I feel the iBooks are a better reading experience–all images are high resolution, the instructional videos are embedded directly in the book (we’ve included links to the videos on our web site in the Kindle version), and there are several interactive “widgets” that can’t be used in the Kindle format. That said, since Apple takes so long to approve books, the Kindle versions look great and are ready  now!

This is the first book in the series and it’s designed to make non-programmers feel comfortable in the Xcode environment as they build a prototype App with zero code…it’s amazing what you can do in Xcode without writing a single line of code! Our company always builds prototypes when we build Apps, so it’s a great first step for non-programmers–and the best part is that you can turn your prototype into a “real” App without losing the work you have invested.

To help out the non-programmer, we have included links to videos on our web site where I work through all the step-by-step instructions in each chapter, so you can see for yourself how each step is performed. In the iBook version, these videos are embedded in the book. 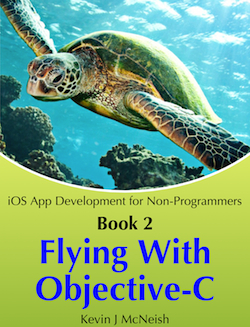 The second book in the series teaches Objective-C from the ground up. This book is extensive, and takes the non-programmer through all the basic concepts up through advanced Objective-C technologies. We’re doing the final formatting for the Kindle version of this book and it should be available around September 12, 2012. 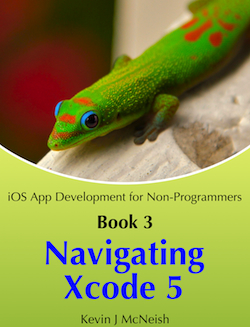 The third book in the series takes a deep dive into Xcode. It covers the as-yet-to-be-released Xcode version 4.5 with iOS 6, so we have to wait until Apple gives the green light (sometime soon) before we can release it. This book has lots of great step-by-step exercises that demonstrate how to create different types of Apps while covering a wide variety of features available in this latest version of Xcode.

In subsequent books, we’ll pull together the mountain of material I have already written, into several more books which we will bel releasing in quick succession.

We have a new web site http://www.iOSAppsForNonProgrammers.com that highlights each book.

We have also set up a forum on our web site http:www.iOSAppsForNonProgrammers.com/forum so readers can post questions and get answers from me and other forum participants.

That’s it for now…I’ll let you know as each book is available! I’ll also be blogging on the hazards, disasters, and joys of writing ebooks for both the iBooks and Kindle platforms!

5 thoughts on “iOS App Development for Non-Programmers – Book 1: Diving In”