For most of my newsgroup posts, I include the following quote in my signature line: “The days pass by so quickly now, the nights are seldom long”.

This quote is a line from the John Denver song, Poems, Prayers & Promises, which was release in 1971 on the album of the same name. There’s a kindred spirit with me and that album for several reasons.

I was attending college at Florida State University (1969-1973). I love playing the guitar, and I owned a 12 string EKO guitar while at college. The FSU bookstore had a spring clearance sale one year, which included two tables of record albums. As I was thumbing threw the records, I came across an album with a guy holding a 12 string guitar. I didn’t know the singer, but I bought the album because, as I remember telling myself,  “anyone who plays a 12 string guitar can’t be all bad!”

Little did I know that John Denver was on the verge of major stardom. In my own way, I feel like I was the one who discovered him, and the rest of the world finally caught up with me. 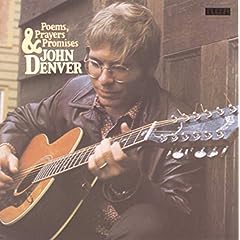 And here’s the lyrics to the song from that album that I use on my sig line:

I’ve been lately thinking about my life’s time
All the things I’ve done, and how it’s been
And I can’t help believing in my own mind
I know I’m gonna hate to see it end

{Chorus}
And I have to say it now, it’s been a good life all in all
It’s really fine to have a chance to hang around
And lie there by the fire, and watch the evening tire
While all my friends and my old lady sit and pass the pipe around

And talk of poems and prayers and promises,
And things that we believe in
How sweet it is to love someone, how right it is to care
How long it’s been since yesterday, and what about tomorrow
And what about our dreams, and all the memories we share

Verse 2:
The days they pass so quickly now, nights are seldom long
And time around me whispers when it’s cold
The changes somehow frighten me, still I have to smile
It turns me on to think of growing old
For though my life’s been good to me, there’s still so much to do
So many things my mind has never known
I’d like to raise a family, I’d like to sail away
And dance across the mountains on the moon