There are a few problems with using areas: 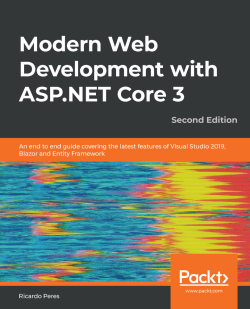 If you are interested in my book, Modern Web Development with ASP.NET Core 3, from Packt Publishing, you can use this code for a 25% discount: 25MODERNWEB.

When it comes to unit testing, it is common to use mocking to replace “external” services, that is, those that are not part of the subject under test. Not everything can be mocked, and, sometimes, when we instantiate non-POCO classes, such as controllers (ControllerBase), there are lots of things that are not instantiated by the framework and are left for us do to. Just think, for example, if you want to access request or quest string data or know if the user is logged in?

In this post I will talk about two things: the user identity and the request data.

Inside of a controller action method, it is common to get information which actually comes from the the context (the HttpContext property):

So, if we want to set a controller’s HttpContext property, all we have to do is set the ControllerContext’s HttpContext:

All of the .NET and ASP.NET Core is very modular and designed for extensibility, so it should come as no surprise that all of the HttpContext features are provided as features and it’s easy to provide implementations for them.

Features are accessible through the Features collection and can be set using as key one interface, which is generally a core interface that identifies that feature:

The DefaultHttpContext takes in one of its constructors a collection of features, from which it can extract its functionality.

When we talk about the request we can be talking about:

Each is implemented by its own feature. So, if we want to mock form data, we would do something like this, leveraging the IFormFeature:

This allows us to write code like this, from inside the :

As for the query string, we would do it like this, using IQueryFeature:

This code gives us the ability to do this:

What about sending responses, HTTP status codes and cookies? I’ve got you covered too! The feature contract for the response is IHttpResponseFeature and we add it like this:

Notice that the ResponseCookiesFeature is a little awkward, as it takes the feature collection in its constructor.

As for the user identity, it’s much simpler, we just need to create a ClaimsPrincipal with any claims that we want:

You can just pass any username and roles you want, and they will be made available to the controller’s User property.

As you can see, with a little bit of work, almost anything is possible in .NET Core, and, particularly, when it comes to unit tests! Stay tuned for more!

ASP.NET Core 3 introduced a not so talked about feature which is dynamic routing. In a nutshell, it means that it is possible to decide at runtime the controller, action and route tokens that a request will be dispatched to. The idea is to map a route pattern to a dynamic route handler, like this:

This maps a route of “/search/<anything>” to a class SearchValueTransformer, which is then responsible for supplying values for the controller and action.

This SeachValueTransformer class must inherit from DynamicRouteValueTransformer, this is the abstract base class for all dynamic route handling, and it only has one method to implement, TransformAsync. The example I am providing here is that of a service that receives some random query for a product on the URL and then decides to which controller it will be forwarded to. A sample implementation of this class would be:

As you can see, it takes an instance of an IProductLocator (I will get to that in a moment) in its constructor, which means that it supports dependency injection. The TransformAsync extracts a “product” parameter from the route – I am skipping validation because if we got here that’s because we matched the route – which it then uses to call the stored IProductLocator instance to retrieve the id and controller, which are then set as route parameters. The result route is then returned.

The SearchValueTransformer needs to be registered in the dependency injector too:

The actual lifetime is irrelevant, here I am setting it as singleton because the SearchValueTransformer holds a single IProductLocator which is itself a singleton and nothing else.

As to the IProductLocator, here is it’s interface:

The actual implementation, I leave it up to you, it must apply some logic to the product passed in the URL to decide which controller should be used for search it, and then return some reference and a controller responsible for returning information about it. This interface and its implementation must also be registered:

And this is it. This may serve as a complement to static routing, other uses include translating route parts (controller, action) on the fly. As always, hope you find this useful!

Sometimes it might be necessary to access the current HttpContext from inside a DbContext, namely, from inside the OnConfiguring or OnModelCreating methods. Why? Well, for once, because of multitenancy: we may want to be able to decide the connection string to use based on the requesting or the host’s domain, the current user or some other request parameter. Here the internal dependency injection (Instance) can’t help, because it cannot be used inside these methods.

The only option we have is to inject the IHttpContextAccessor class through our DbContext class’ constructor, and, from it, get hold of the HttpContext.

First we need to register the IHttpContextAccessor service in ConfigureServices:

We also need to register our context for dependency injection:

Finally, when you need to access the HttpContext, you just need to retrieve it from the IHttpContextAccessor:

Here the hypothetical ITenantService provides a method GetConnectionString that returns a connection string for the current HttpContext, and we use it with the SQL Server provider.

Hope you find this useful!

This is a book written by Mark J. Price for Packt Publishing. I must say that I don’t know Mark, but I was asked by Pack to review this book, which I gladly did!

The topics covered in this book are vast, so it should be no surprise the size of it: more than 800 pages. It spawns across 21 chapters, each of them ends with some exercises. It talks about pretty much everything .NET, as you can see:

Introduction to Visual Studio Code and Visual Studio 2019 for Windows and Mac. Presents some useful extensions for Visual Studio Code. Talks a bit about the .NET Framework and its branches and offspring, Xamarin, Mono and .NET Core. Also explains the intermediate language that .NET compiles to and how to produce native code from .NET. Also shows how to use Visual Studio Code to get code from GitHub and build console apps. Finally, it gives some pointers on how to get support from the Internet.

Presents all the C# versions from 1 until 8, the last one to date. Shows how to enable a specific version on a .NET project. Gives a an overview of the unchanging C# language features, like variables, data types, reference and value types, and presents a simple example on how to get input from the user.

Introduces functions, how to debug and unit test them.

Explains Object-Oriented Programming with C#. How references to assemblies and namespaces work. Field and property modifiers. How to use the return values of functions, including tuples. Method overloading, optional parameters. Partial classes. Properties with indexers and different levels of access.

As you can see, this is a lot, and goes from the plain C# language to machine learning and Blazor. I’d say that some topics, such as Content Management Systems, could have been dropped, but other than that, pretty much everything that a developer longing to learn .NET could wish for is here. A great deal of ASP.NET Core, which is good, as it is for sure the strong part of .NET Core. So, if you’re one such developer, this is one book that you may want to get, you won’t feel disappointed! Definitely a good value for money!

I finished reading Hands-On TypeScript for C# and .NET Core Developers by Francesco Abbruzzese (@f_abbruzzese) for Packt Publishing. As the name states, it is about TypeScript (and JavaScript) and also very much about Angular.

At the end of each chapter there is a summary which highlights the key aspects that were introduced in it, poses 10 questions, which are answered in the Assessments chapter.

The book covers TypeScript 2.8.3, which is relatively old by now, but given the pace that TypeScript versions come out, it can hardly surprise us. Some new stuff in TS is missing, of course, but I guess this will always happen. It is essentially a book about TypeScript and Angular, but of course also covers Node.js and, obviously, JavaScript itself. .NET Core here is discussed as leverage to deploy and compile client-side code. The book is quite comprehensive and was actually an interesting read and I definitely learnt a lot.

The source code can be found in GitHub here: https://github.com/PacktPublishing/Hands-On-TypeScript-for-CSharp-and-.NET-Core-Developers.

If you got interested, please go get if from the Packt Publishing site: https://www.packtpub.com/application-development/hands-typescript-c-and-net-core-developers.

I started reading a book by my MVP colleague Francesco Abbruzzese (@f_abbruzzese) on C# and TypeScript: Hands-On TypeScript for C# and .NET Core Developers. So far, it seems an interesting reading! Will write a review about it here, once I finish reading it. In case you want to know more, go get if from the Packt Publishing site: https://www.packtpub.com/application-development/hands-typescript-c-and-net-core-developers. 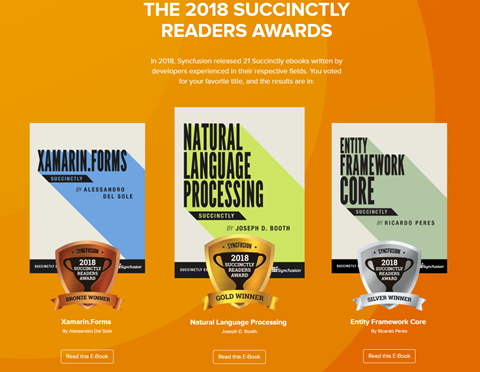 Many thanks to all who voted for it! And congratulations to Joseph D. Booth for winning the gold award for his Natural Language Processing Succinctly and to Alessando Del Sole (@progalex) for his bronze award for Xamarin.Forms Succinctly!