PowerPoint Heaven Updates on Jerry Lee’s artworks:
1) Added a new PowerPoint Webcomic, Powerpuff Girls: The Boys Are Back In Town. The webcomic is based off a popular cartoon, The Powerpuff Girls, and is well-inspired by the works of Bleedman. It is a grown up version of the cartoon, where the story revolves around three girls: Blossom, Bubbles and Buttercup, who have now got into college. (Link can be found on front page) 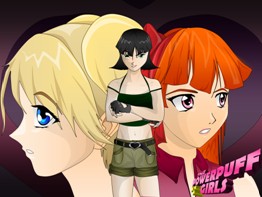 2) Added Basic PowerPoint Art Tutorial. This is a tutorial that shows you how to draw a comic character in PowerPoint. In this tutorial, you will follow step-by-step instructions to “build” your first comic character, Ms. Orange. (Link can be found in Jerry’s Projects)

(3 hours updating the site! And it’s 4am now. I can finally go off to get some rest.)